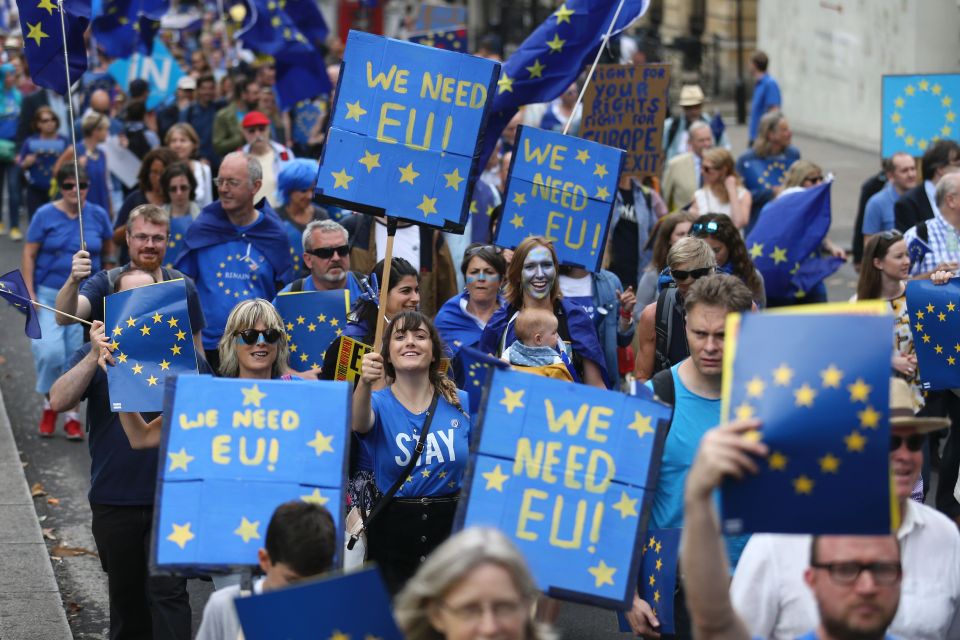 I’ve seen quite a few people commenting on the 25 March anti-Brexit demo, questioning how big it really was and ridiculing its political character. And as someone who’s been on quite a few demonstrations in the last two months (including this one), I think I’m in a position to comment.

By my reckoning (and I realise that this is not quite a scientific assessment), it was larger (by an order of size) than Stand Up To Racism’s march for UN Anti-Racism day. As in, probably about four or five times larger. And it was easily in the same ball park as the recent national march in support of the NHS, and the larger of the two big anti-Trump marches.

So this puts it somewhere in the ballpark of 100,000 to 200,000 – as opposed to the 20,000 to 30,000 or so that the major far-left groups (and their front organisations) can mobilise at a stretch when they don’t have the support of the major trade unions. I think that this says a lot, not just about the reduced organising capacities of the organised far left since the Corbyn surge and the SWP’s self-destruction, but also about the way that their politics on Brexit and free movement of labour have created an obstacle to their ability to mobilise progressive opinion against the tide of chauvinism and nationalism that we are seeing manifest itself across the Western world.

Politically, it was of course dominated by drippy liberals (mainly liberals with a small “L”, I might add), and it showed. I’ve never seen a big demonstration so quiet – none of that loud chanting that you see at bog standard labour movement demos, no trade union banners or local community-based campaigning groups (and only the odd one or two Labour party banners), but lots of those quirky individually-created placards with silly jokes that you see people with on left-wing demos as well.

And the speakers on the platform were even drippier and more liberal. For example, of all of the things that I would denounce Donald Trump for, the fact that he regards NATO, that “cornerstone of our collective security” as being obsolete is hardly one of them.

Possibly some of them (shock, horror) can see the connection between Trump and Assad, or Trump and Putin. I’m sure a lot of them would have voted for Hillary if they had been American, and more than a few of them probably regard Jeremy Corbyn or Bernie Sanders as dangerous demagogues no better than Trump or Farage.

Many of these same drippy liberals will have been on the anti-Trump marches as well, and many of them are quite rightly alarmed by the lurch to the right that British politics is taking as a result of Brexit. Some of them might not even be that drippy or liberal, but just good anti-racists who have found themselves abandoned by their natural allies on the left, and with only drippy liberals to articulate and give voice to their justified alarm.

And while this was visibly a more “middle class” demo than its left-led equivalents, as with all major mobilisations there would have been more than a few (progressively-minded) working-class people there as well – just as the (progressive elements of the) “middle class” are hardly alien beings on the organised socialist left or in the labour movement in general.

The tragedy is not that some bourgeois liberal no-marks were able to mobilise greater numbers than the labour movement and the organised far left (with all of its expertise and experience at this sort of thing), but that the labour movement and the organised far left were so conspicuous by their absence. Had they been present, they might have been able to make the case for fighting the reactionary consequences of Brexit by the militant methods of class struggle, in place of the promotion of hopes in some backroom manoeuvring for a second referendum, or the promotion of the Greens or the Lib Dems as “the real opposition” in place of Labour.

The comparison that I would make would be with the UN Anti-Racism Day demo (which as I mentioned, was visibly far smaller), where none of the official slogans even mentioned Brexit, even if quite a few of the platform speakers (not being bound by an SP, SWP, CPB or Counterfire party line) did.

Finally, I’m sure that some of the more Russophile elements of the pro-Brexit left will be comparing yesterday’s demonstration with the Ukrainian Maidan, as a manifestation of middle-class liberals with illusions in the “progressive” and “democratic” character of the EU. The sad fact for these people is that Brexit was our Maidan – a movement for reactionary objectives promoted in the name of “national sovereignty” and “independence” (and attracting the support of the most disillusioned and least class-conscious) that took in a deluded part of the left alongside a much more conscious swathe of the far right and conservative-reactionary right. The fact that a majority of our ruling class didn’t want Brexit, didn’t expect it and didn’t plan for it should hardly be any more consolation for us than the fact that a majority of the US ruling class didn’t want, expect or plan for Donald Trump.

Originally posted on Facebook. Marcus is a supporter of Red Flag magazine.