There must have been somewhat less than five hundred people at the Momentum “conference” in Birmingham on 25 March.

This strikes me as not a brilliant turnout for an organisation with 20,000 members, an even bigger database, a substantial office, extensive social media, huge general awareness and John McDonnell speaking.

Before I go on, I should say that quite a bit of this report is negative. I take no pleasure in that but if there’s any point in reporting, it needs to be honest and reflect reality. If anyone thinks I’ve got anything factually wrong, or just wants to comment, please feel free to drop us an email at theclarionmag@gmail.com

On factor affecting turnout may have been that the event, which was in fact a dayschool – there was no decision-making of any kind on the agenda, or even chances to discuss the future of the organisation – was organised at short notice to replace the actual conference long-planned, much bureaucratically hindered and then abruptly cancelled by the Momentum office. In addition, this coup has worsened general demoralisation created by the wider political situation and the Labour leadership’s response to it. Quite a few attendees told me that their local Momentum group has stopped meeting or been severely weakened as result.

It was noticeably younger than the Grassroots Momentum conference on 11 March, but not dramatically so. Most people present were still middle aged or older. There were people there from a good range of groups across England, at least.

The Clarion ran a stall and got a fair amount of interest, selling 60 copies and a few subscriptions, and collecting a lot of contact details. I think with a few more people and better organisation we could have got a lot more.

The World Transformed event in Liverpool last September. The 25 March Momentum event was similar in some ways, but both a lot blander than TWT and pretending to be something other than it was

After problems, which I won’t go into, with booking a stall in advance, we got one by turning up and grabbing it. I noticed that many of the pre-booked stalls were run by organisations from a broadly Stalinist and Stalinist-influenced left milieu: the Morning Star, Stop the War Coalition, Cuba Solidarity, and so on. This is not “new politics” but a rather distinct and bad old politics. I note that, in contrast to all the hostility and irrationality about “Trots” in Momentum, there still seems to be a marked friendliness to the likes of the Morning Star – whose politics made it describe the fall of Aleppo to Assad as “liberation”, and which in some cases still supports candidates standing against Labour! And of course this is not unrelated to the fact that some people near the centre of Momentum and in Jeremy Corbyn’s inner circle are Stalinist or Stalinist-influenced, and rather more remarkably tolerant of Stalinism.

The other left-wing publication being sold around the event quite pro-actively and visibly was the version of Labour Briefing produced by Christine Shawcroft (i.e. not the LRC version). I wonder if this magazine, which has been given a seat on the Momentum NCG, is becoming the sort of house journal of the Momentum leadership faction.

The dominant political tone of the conference was: keep it safe, moderate and respectable; avoid difficult issues or anything involves organising a real struggle; avoid any possibility of discussion on the record, state and future of Momentum.

“Building to win” was certainly not an accurate description. As far as I could see, there was no space anywhere on the agenda for questions or contributions in plenaries, or for discussion beyond very specific topics or workshop “processes” in any of the sessions. This meant that no one was able to get up and criticise the coup or how Momentum is being run – or, even more importantly, strategy for the left in Labour. From more general discussion and one-to-one conversations I don’t think many people there were bursting with outrage at this, although many were pretty critical and supportive of a more democratic, substantive and radical approach.

John McDonnell, who was the only big name speaker at the event, gave one of his increasingly usual moderate and not hugely substantial speeches, in a way that could sound radical if you’re not listening carefully and thinking it through. Maybe most people aren’t. He got cheers from the crowd but didn’t challenge anyone, particularly himself. I think McDonnell’s speech deserves a separate write up as it is indicative of the orientation and self-presentation of the Corbyn leadership.

Despite the claim at the start that the workshops were being run by local groups, this didn’t seem to be true. Many seemed to be run by individuals from the Momentum office, individuals close to the Momentum office or at least people from the “leadership faction”. Some of it seemed pretty bland and contentless. From what I’m told, the Labour Party-related workshops were neither good basic training on how to get involved and what to do nor (certainly not) strategic discussion about the way forward for the left in the party. Instead, those who took part got a load of management speak and guff about consensus.

The trade union session was, from what I’m told, of limited value for discussing actual organising or solidarity work. In that workshop, as in several others apparently, attempts to raise general questions about strategy and policy drew sharp responses from the chair: a Len McCluskey supporter who tried to object to Momentum backing McCluskey without discussion among Unite members in the organisation was pretty much shut up.

In contrast to the Grassroots Momentum conference, there were no workers in dispute speaking – so the policy won by the left on the new National Coordinating Group, of support for struggles like the Picturehouse workers and the Derby and Durham TAs, seems to be staying largely on paper.

There was a lot of promotion for the Momentum councillors network. Despite Derby and Durham, the dominant public line promoted by Momentum doesn’t seem to differ much from the right-wing argument that Labour councillors are doing all they can in the context of Tory cuts. People are being encouraged to stand for selection and election without even a discussion about what the role of Labour councillors is, let alone anything more militant.

There seemed to me to be little discussion of building Momentum groups, and virtually none about building Young Labour groups or student Labour Clubs.

Sean O’Grady’s write up of the conference in the Independent is a silly right-wing hatchet job, but it’s hard to disagree with this comment as a general summary: “So Tom Watson and his allies who fear Momentum should relax to that degree at least. They’re not capable of plotting. [At the event] in Birmingham, no policies were being formulated – far from it – beyond the usual devotionals for Corbyn.”

Surely this was in large part deliberate. Why would Jon Lansman et al go to so much trouble and spend so much time and energy to suppress democracy in Momentum and prevent its members discussing politics and formulating policy, and then organise a forum at which they can do so? It also represents a way of doing politics that people have learnt over a relatively long period of time (in part from Blairism) or been trained up in since 2015.

Again, this is not to say that everyone there was sharply critical or will have gone away from the event unhappy. It generally feels positive and encouraging to get together with lots of people with similar views and have a talk. I’m sure there was some useful discussion within the spaces of even some quite useless sessions. But Momentum is failing in its responsibility to create forums designed for ideas and proposals can be seriously debated and people get organised, and thus is organising events which in many respects are useless.

One exception to the lack of substance at the conference was the workshop on NHS campaigning, which had been given to NCG member and junior doctor Yannis Gourtsoyannis to run. Yannis was elected to the NCG as part of the pro-democracy/left grassroots slate, and most of the other people who played a key role in the workshop are also on the left of Momentum, as well as being health workers and NHS activists with serious records.

Although the slot was too short – another problem with the sessions in general – there was some useful discussion both about practical activity and about changing Labour’s NHS policy and campaigning; and coming out of it an agreement to relaunch Momentum NHS, which since Labour Party conference has been hindered rather than helped by being reliant on the Momentum office. Momentum NHS activists caucused later in the afternoon and agreed to reinvigorate an NHS activist network within Momentum, to undertake various campaigning initiatives and to hold a national meeting on 20 May to get the network really functioning. We should cover this.

There was a certain amount of crossover with attendance at the Grassroots Momentum conference but with the exception of Clarion supporters such as NCG members Sahaya James and Rida Vaquas, few if any prominent Grassroots Momentum people were there. I think that reflects a legitimate frustration with official Momentum but also in some cases a political standoffishness (or even for a few people a desire to split) which is not justified. Despite the damage and demoralisation caused by the coup, hundreds of Momentum activists were there and available to talk to and organise with. Obviously we need a lot more discussion about the way forward, but I’m glad we were there too. 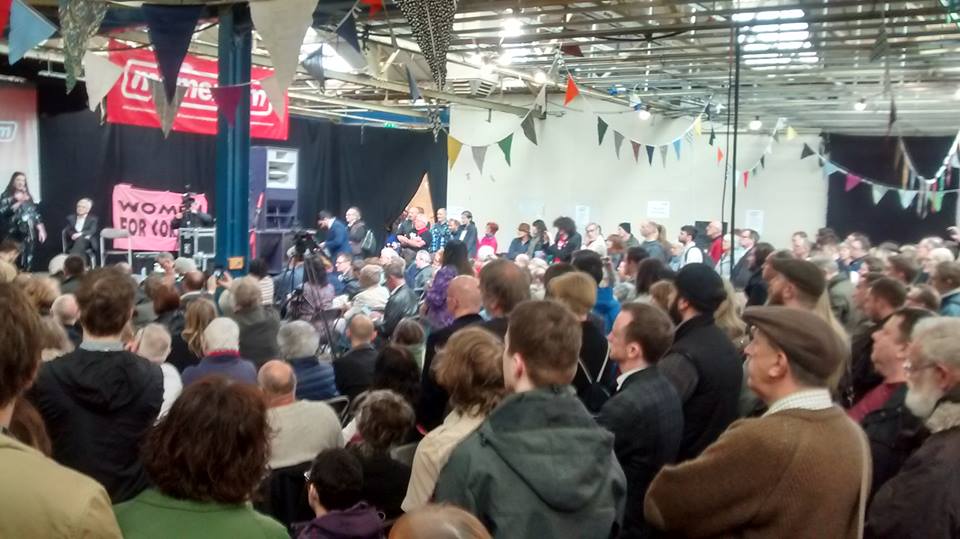