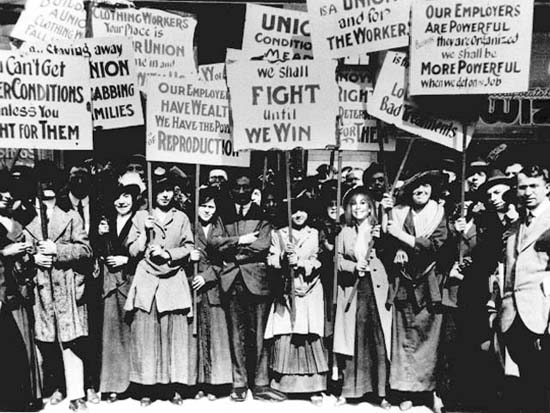 On 8 March, Momentum Darlington held a public meeting to celebrate International Women’s Day, the history of women’s political struggle and its relevance today. Speakers at the meeting included myself, Lisa Turnbull from the Durham Teaching Assistants campaign and Honor Wilkinson-Bell and Beckie Walker from Darlington Young Labour, and it was chaired by Catharine McLaren from Momentum Darlington.

I spoke about the significance and roots of International Women’s Day and its relevance now with attacks on women in the workplace, our pay, conditions and reproductive rights.

What was originally “International Working Women’s Day” was born out of working-class women’s struggle. The early 20th century was a revolutionary time for socialist women, trade unionists and activists. 8 March marked a date in successive years from 1907 which saw women demonstrating in New York City demanding votes for women and an end to child labour and sweatshops. 8 March 1908 saw 15,000 women march through NYC calling for better pay conditions and the right to vote and in 1909, women staged a 13 week strike.

Following this in 1910, Clara Zetkin proposed to the International Congress of Socialist Women that “the socialist women of all countries will hold each year a women’s day”. So in 1911 the first International Women’s Day was held and this was celebrated in countries across Europe with more than a million women and men attending IWD rallies demanding the right to work and vote.

Socialist feminists such as Sylvia Pankhurst and Mary McArthur were organising working-class women in Britain. In 1918, women workers on London buses and trams were the first to strike for equal pay. By this time there were more than a million women in trade unions.

Standing in that tradition, Momentum Darlington has proposed and won support for the Durham Teaching Assistants at Darlington CLP and worked with Young Labour protests against cuts to our NHS.

This well attended meeting is part of making links between working-class women’s struggles today and the rich history of our movement. We hope to make this an annual event and continue to strengthen our links with the Durham TAs and the Young Labour group.