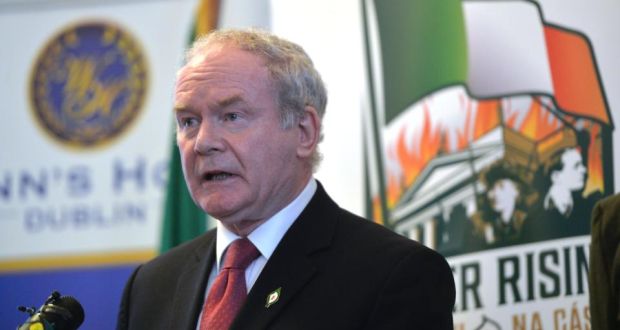 McGuinness was born in the working-class Bogside area of Derry in 1950, to a religiously devout and politically moderate Catholic family. With little previous interest in politics, McGuinness was jolted into action by the violent response of the Stormont government to the demands for civil rights for the oppressed nationalist population.

He told journalist Eamonn Mallie in 2015: “I believed that in a situation where the community that I came from was being treated like second and third class citizens, that I had a responsibility to fight back against it and I don’t apologise to anybody for having done that.”

It was against the backdrop of oppression that young working-class people, like Martin McGuinness, joined the ranks of the Provisional IRA. Socialists should oppose sectarian killings and the targeting of civilian populations, but we have nothing in common in our criticism with hypocritical apologists for British imperialism, such as Norman Tebbit, or wretched Tory rags like The Sun, currently agitating for amnesty for British soldiers accused of murder in the North of Ireland and elsewhere.

But it was not for civil rights within the Six County state that McGuinness fought; he soon joined the Official IRA in his native Derry, leaving shortly afterwards to rise up the ranks of the Provisional IRA.

The Provisional demand was for British withdrawal and a united Ireland; and though professing the traditional republican aspiration to unite “Catholic, Protestant and Dissenter”, the Provos were galvanised by powerful communal impulses, especially in working-class Catholic areas in Derry and Belfast under attack from the Royal Ulster Constabulary (RUC), loyalists and the British Army.

McGuinness was just 21 years old when 13 innocent civilians were murdered by the British Army in Derry on Bloody Sunday in January 1972 – and a further died from injuries just months afterwards. By this time he was already an important figure in the Provisional IRA and by 1978 would attain the position of Chief of Staff.

Heading up the IRA’s Northern Command during the following decade, McGuinness oversaw some of the Provisionals’ most ruthless operations. Controversially, this included the use of human proxy bombs in the case of Derry-born Patsy Gillespie, a civilian cook in a British Army base, who was forced at gunpoint to drive explosives to an army checkpoint on the Derry-Donegal border in 1990.

Along with the Enniskillen Remembrance Day bombing three years previously, it was the revulsion felt at such self-defeating actions that prompted growing doubts about the Provisionals’ narrowly militarist armed strategy. Ever since the hunger strikes of 1980-1, and the election of Bobby Sands to the House of Commons in the Fermanagh and South Tyrone by-election, a section of the Provisional leadership recognised Sinn Féin’s potential for political growth.

It was, however, McGuinness’s ruthlessness as a military commander which gave him the authority to win over IRA volunteers to the political path. Gerry Adams, more theorist than soldier, needed a man of McGuinness’s reputation and standing to convince the rank-and-file that they were not heading for a sell-out.

Tentatively at first, the “armalite and the ballot box” strategy, then the “Tactical Use of Armed Struggle”, had an inbuilt logic towards subordinating the armed struggle to the growing electoral project of Sinn Féin. It would lead to republicans eventually dropping their demand for British withdrawal as a precondition for talks, and an acceptance that Ireland could not be united by coercive means in the face of opposition from its million-strong Protestant-Unionist minority.

With the abandonment of militarism leaving a political hole in the republican movement, it proved once again that armed revolutionary nationalist movements can reconcile themselves to more or less conventional bourgeois politics. McGuinness’s career exemplified this, and he became central to Sinn Féin’s political project; first through his involvement in early back-channels to the British government, and later in his role as Sinn Féin’s chief negotiator in the talks which led to the signing of the Good Friday Agreement in 1998.

In the first power-sharing government, McGuinness was appointed Minister for Education in 1999, and oversaw the abolition of the selective 11+ exam. More recently, in 2007, he became the Deputy First Minister and led the Northern Ireland Executive alongside the Democratic Unionist Party’s (DUP) Ian Paisley.

The Agreement largely put an end to the violence of the previous thirty years, with the creation of power-sharing and a baroque bureaucratic infrastructure designed to manage sectarian tensions. Welcome as the end to violence is, the Agreement has, however, done little to resolve the underlying problems, and those tensions remain. The solution will ultimately require democratic labour movement politics, not communalism, capable of both fighting national oppression and uniting workers around their common interests.

Though the Good Friday Agreement, for many republicans, was borne out of a realpolitik assessment of the failure of the armed struggle, McGuinness is widely regarded as having shown a deeper commitment to power-sharing, as well as the capacity to make both real and symbolic compromises to Unionism. It is for this reason that McGuinness’s death also brings to an end a distinct chapter in Sinn Féin’s political development.

His retirement was the trigger for a new Stormont election, which saw a resurgence for his party amid significant nationalist disquiet at their treatment at the hands of the DUP. Arlene Foster’s arrogant refusal to stand down in the face of allegations of incompetence and corruption has led to the loss of the Unionist majority in the Assembly for the first time since the foundation of Northern Ireland.

Negotiations continue but the return of power-sharing looks less and less likely. Meanwhile, uncertainty around Brexit has fuelled increased speculation about the prospect of greater Irish unity.

With Sinn Féin also performing strongly in the polls south of the border, the leadership of the party is passing increasingly over to a new post-Troubles generation. Perhaps no one did more to shape the modern-day Sinn Féin but the outlines of a post-McGuinness era are as yet, far from clear.