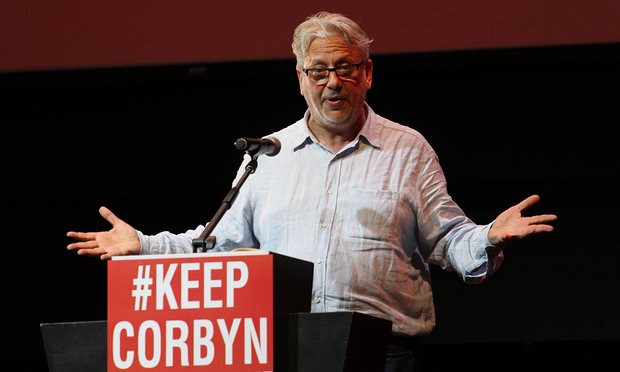 Jon Lansman’s appearance at Hounslow Momentum was a welcome opportunity to debate both the way forward for the Labour Party and Momentum with the Momentum founder and database owner himself. Sadly, it seemed for Lansman that a full discussion of the way forward for Momentum was not what he wanted, and when it was had the arguments were tired, disappointing and just plain wrong.

Addressing the meeting by saying from the outset he wanted it to be an interactive conversation with plenty of input from the floor, he almost immediately opened up the floor to discuss what makes a democratic party. Suggestions from mandatory reselection, accountable MPs, a bottom up process of decision making and a sovereign conference all came up in the initial discussion. Lansman talked about the way the Labour Party has changed since the 1960s and also the role CLPD played in the 1970s and 1980s in trying to democratise the party. Interestingly in response to talking about how the leader relates to the membership he said even now that Corbyn’s office appears to be large and unwieldy with lots of staff there to ensure you don’t get to speak to the leader himself. This is in contrast he said to even Wilson, a right winger but who would apparently be very easy to get meetings with if you were another MP or campaigner.

Rather oddly he said that while he was in favour of mandatory reselection, just as you have for councillors he would be against mass reselections now. This is a decision for CLPs he repeated several times. As members of the audience argued, it is likely to be used where you have an MP who opposes the membership and that this could mean multiple reselections going on, which would be healthy and in fact particularly necessary to build a PLP that respected the views of the members. Unfortunately this line seems to mirror that of McDonnell who always has a plan to apparently make unity with the right wing, whilst being continually undermined by them.

Whilst Lansman seemed keen to keep the discussion about Momentum right to the end, not surprisingly multiple people wanted to raise points and discuss the coup, the way forward, Momentum’s role, its interactions with local groups and the Grassroots Momentum conference held the previous weekend. His affability in the early discussions turned quickly sour once Momentum became the primary item on the agenda.

Not surprisingly many ardent supporters of “One Member One Vote” (ie running things by online membership ballots) were scathing about the Momentum coup and the newly imposed constitution. For those who supported an OMOV system, something which this author did not, the constitution offers no opportunity for that whatsoever, and is in fact a much bigger move away from OMOV then the provision of a decision making conference and support for local groups.

On the issue of how local groups can use data, Lansman seemed to really break his cool, furious at one member’s assessment as to how useless the access to data was and what they had to do with it to make it useful. Finding out when someone has joined Momentum, left Momentum, being able to make notes or on the phone app, being able to find Hounslow were all apparent problems faced by the group. Lansman’s response that they have faced numerous malicious complaints to the Information Commissioners Office (ICO) and have to incredibly careful with how the data is used is all doubtless true, but groups asking for a better understanding of how to use it and suggesting how to change it are reasonable democratic questions. Being shouted at or having concerns brushed away is certainly not kinder gentler politics.

On the role of Momentum, Lansman sees it as giving Corbyn the chance to lead and providing ongoing organisation that will be there for his succession or any attempted challenges. The passing of the McDonnell amendment to make the threshold lower to get MPs on the ballot is now a battleground. It was notable though that listing the CLPs who are currently supporting it, he did not mention what involvement Momentum had.

He agreed that the way lists of people to vote for in the CAC and NCC elections may be less than transparent but this was not really in Momentum’s control. No suggestion that Momentum is in a position to try and run its own slate probably reflects Lansman’s background in the CLPD and their chief ideologue Vladimir Derer who firmly believed that alliances with the centre and soft left were needed to get useful measures through. Lansman for instance said that the right will often support policy motions but not rule changes. Momentum will need to be much more serious about intervening in Labour Conference if it hopes to pass either rule changes or progressive policy. It remains unclear other than by the sending out of emails how it will do this.

Lansman cited that local groups are critical to Momentum and using them to encourage and train people ready for branch, GC and CLP meetings is very important. I said that given in the run up to the coup that one of the main drives in Momentum had been to tell everyone via the media that meetings were just ways of trots and the hard-left winning influence and were excluding the genuine new young activists, that to then try and turn people out to meetings was made all the more difficult. If meetings aren’t really important or the way forward, why should anyone attend their boring or even hostile GC?

As Lansman had said at the NCG meeting he hopes Momentum can be a broadly consensual organisation where we “focus on what we agree about.” The fundamental flaw is that while he is right that most of what was passed at the Grassroots Momentum conference and in fact even argued by his opponents on the Momentum Steering Committee he may actually have agreed to, he was absolutely against and stopped action being taken. Half-hearted support for the Picturehouse Workers Strike, a statement about suspensions and expulsions which has still never materialised were all agreed at what he described as “deeply unpleasant” SC meetings.

His random assertion that his opponents in the Momentum Steering Committee wanted to setup a “democratic centralist” organisation are ridiculous. He was however correct when he said that it is true that lots of Momentum members do want an organisation that puts pressure on Jeremy Corbyn from the left. Lansman is fundamentally opposed to this and while it was unsaid, this is really what the coup allowed him to stop. On the coup, he went as far to suggest that “I do not claim the way we introduced the constitution was right” but he defended its necessity, as he could not waste time visiting groups and networks trying to win them round. We could of course wonder, is this because you would not have won them round after all?