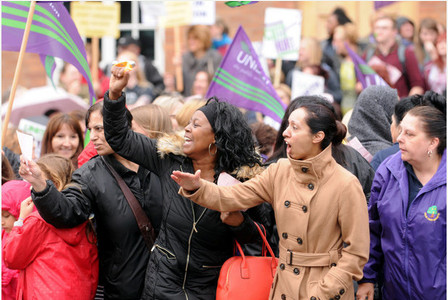 “Derby North Constituency Labour Party regrets the way Derby City Council has handled the ongoing school support staff dispute. This has damaged the Labour Party’s reputation in Derby and across the East Midlands, culminating in the Party’s poor performance in the recent Derwent Ward by-election.

“We believe the Labour-led Council should be standing up for the right​s​ of low paid public sector workers who are taking industrial action to protect their terms and conditions.

“Derby North CLP is concerned that the Labour-led Derby City Council has failed to live up to the values of the Labour Party and the Labour movement.”

This comes as Derby’s council has started to hesitate and put a proposal that makes concessions. The strikers’ determination combined with growing solidarity around the country is having an impact. Now is the time to step it up, not relax. Let’s step up our solidarity and help them win.

• Please join Matt Wrack and hundreds of Labour Party members and trade unionists across the country in signing this statement in support of the workers.
• Pass a motion in your CLP or other organisation: model motion here.
• Durham teaching assistants will be restarting their campaign against pay cuts – suspended but not withdrawn – with a day of action and big demonstration on Saturday 25 March. They will march through Durham city centre, followed by a mass rally at the iconic Miners’ Hall at Redhills. Details here.