By Janine Booth, RMT activist and author of Guilty and Proud of It, Poplar’s Rebel Councillors and Guardians, 1919-25

Minnie Lansbury was a school teacher, suffragette, champion of the victims of war, rebel councillor and socialist martyr.

Born Minnie Glassman in 1889, she was the daughter of Jewish immigrants to the East End of London, who had fled the anti-semitic tyranny of Russian Poland. Born into a storm of working-class revolt and left-wing political agitation, Minnie became a socialist and a campaigner for votes for women, leaving her teaching job in 1915 to become full-time assistant secretary of Sylvia Pankhurst’s East London Federation of Suffragettes.

She and her husband Edgar Lansbury (son of future Labour leader George) campaigned against the First World War, and were arrested at a peace demonstration at the Dock Gates in December 1916. Labour demanded representation on the committees that administered war relief, and Minnie became a member of Poplar’s War Pensions Sub-committee. She became well-known as a fierce advocate: she refused to administer the funds in the “neutral” way expected, but acted more like a union representative for widows, orphans and disabled servicemen.

Enthused by the Russian Revolution, Minnie became a Communist Party member as well as a Labour Party member. It was then possible to be both, and the unity between different shades of opinion in the East End’s labour movement was one of its strengths. 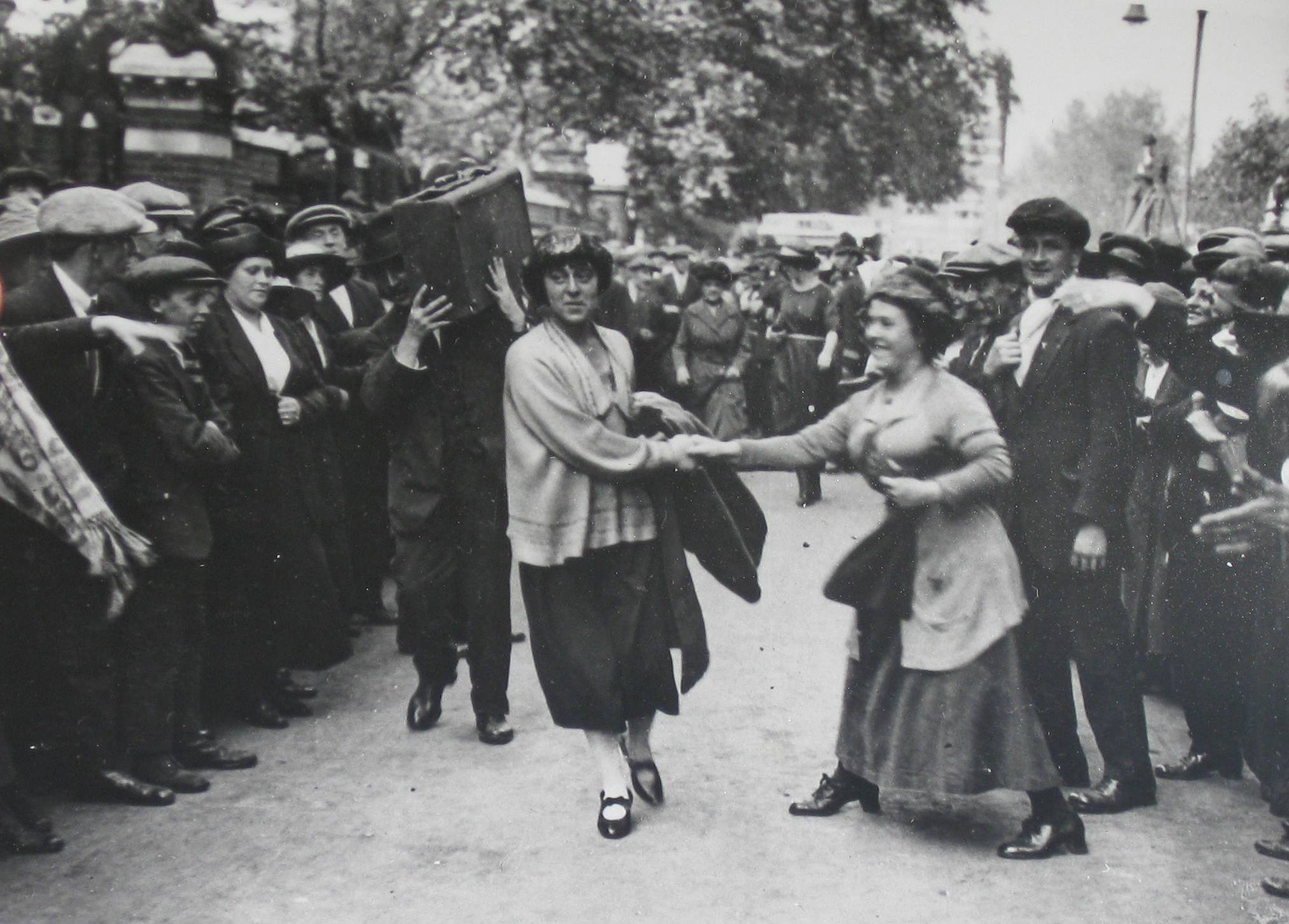 Lansbury on her way to being arrested in Poplar

When newly-enfranchised working-class voters elected Labour councils across London in 1919, Poplar Borough Council appointed Minnie Lansbury as an Alderman. Continuing her community activism, she opened her house to constituents every morning, and delivered significant improvements in maternity and child welfare provision. Poplar’s Labour Council radically improved services to the working-class residents who had elected it.

But when economic crisis hit, Poplar Borough Council faced a choice: to cut services, raise rates or defy an unjust funding system. It chose the latter, and refused to collect the precepts for cross-London bodies. As the councillors, including Minnie, went to court, thousands of people joined demonstrations in their support. Minnie was imprisoned at the start of September 1921, along with 29 of her fellow councillors. Still they held their nerve, Minnie causing a great fuss in Holloway prison to demand better conditions and fight for the councillors’ cause.

After six weeks in prison, the councillors won. They were freed from prison, and the government rushed through legislation to change the funding system so that rich boroughs paid in much more and working-class boroughs like Poplar were paid much more. It was a huge victory.

But imprisonment had taken its toll on Minnie’s health, and on 1 January 1922, aged just 32, she died of influenza and pneumonia. Tens of thousands of people marched through the East End at her funeral, paying tribute to a great socialist and a great champion of workers’ and women’s rights.