In 2012 the Fire Brigades Union successfully proposed to TUC Congress that the labour movement should respond to the capitalist economic crisis and austerity by demanding public ownership of banking and high finance. Successfully in the sense that the policy was passed – not successfully in the sense that the TUC did not carry it out and that few other unions have raised the idea, let alone campaigned for it. Now that the FBU is reaffiliated to Labour, it is hopefully something that can be raised there. With the possibility of a new banking crisis, this debate could be live again very soon too. 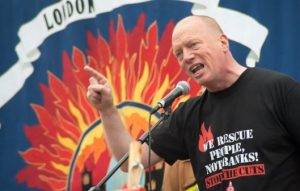 The economy staggers from crisis to crisis. Overly optimistic government predictions are refuted by the harsh reality of a double-dip recession. The crisis has devastated the lives of workers in Britain and across the world. Austerity measures mean real wages cut, unemployment, pensions destroyed and public services slashed. They are on a scale not seen before.

The aim is to make working people pay for a crisis we did not cause. We need to set out clearly what lies behind the crisis.

The Con-Dem coalition argues that further privatisation and deregulation is the route out of recession but it was the deregulated private finance sector that sparked the crisis. The government’s arguments need to be challenged. The banks cannot be allowed to carry on the way they’ve done before. We need a sharp break with the practices of the past.

The labour movement should place on the agenda the call for a publicly owned finance industry which would provide a public service to industry and working people.

Taking over the banks will enable the state to plan investment. Instead of investment bankers gambling with money in financial markets, funds could be switched to creating millions of sustainable jobs and investing in the housing, public services and infrastructure we need. The privately owned banking system created a huge credit bubble that burst and triggered the biggest economic slump in Britain for generations.

When the crisis broke, the government took shares in RBS and Lloyds and took over mortgage lenders Northern Rock and Bradford & Bingley. The taxpayer advanced £133 billion to restore the capital of these banks.

So far, only £14bn of the original cash outlay has been recovered. The banks are still rigging interest rates, laundering illegal cash, gambling in exotic financial assets and paying their top executives grotesque salaries and bonuses.

Three-quarters of the assets of Barclays bank are invested in trading on the stocks, bonds and currency markets. Barclays’s elite traders and top executives took £1bn home between them this year to “reward” this gambling.

Banks still engage in outright deceit and law-breaking. Barclays was caught out over the Libor scandal, HSBC in laundering Mexican drug money and Standard Chartered with Iranian banks. The banking system is not doing its job in providing loans on reasonable terms to help the economy recover.

In addition, we need banks to raise funds and provide credit to finance investment and growth across an economy. This is what banking as a public service should be about. Britain’s big banks dispose of £6 trillion in funds. Yet they earmark just £200bn of this to investment in industry, a measly 3 per cent of the total.

Four years after the crisis began, bank lending is falling, not rising. The banking sector stands indicted by these figures. Having been bailed out by the taxpayer the banks continue to fail to assist in any sort of recovery.

Regulation failed to stop banks collapsing and bringing down the economy. More regulation won’t work now. It’s expensive, bureaucratic and ineffective. Despite the mess the banks have caused, we are still told we should leave them as they are because they make money. But a survey of the period from 2002-2008 shows that the finance sector paid £203bn in tax, while manufacturing paid nearly twice as much. Tax revenue from the finance sector during that period was less than the estimated up-front costs of the bank bailout of £289bn.

Some argue that the banks should be broken into smaller units so that competition can flourish and the monopoly of the big five can be broken. But the banks are too interconnected – if one goes down, they can all go down like a row of dominos.

In any case, the crisis did not start with the big banks. In Britain, it started with the smaller lenders like Northern Rock. More regulation or a break-up of the banks will not make them operate in the interests of the wider economy. Their main objective will still be to maximise profits for their shareholders and bonuses for their top executives. Private ownership means profit comes before everything else. New regulations can be bypassed. That will continue as long as banks are under private ownership.

The public has no control over the banks’ decision-making, even in banks that are majority state-owned. Only public ownership of the major banks with a new democratic structure of control can turn banking into a public service. A publicly owned banking system could finance a mass programme of useful public works, to create jobs and modernise infrastructure.

We therefore welcome that for the first time in history, the TUC has adopted the policy of the public ownership of the banks.

In the past, Margaret Thatcher attacked us not because she was mad, but because she was acting in the interests of the ruling class. Today, in the face of economic crisis, this same class wants to restructure the economy in the interests of capitalism and make the working class pay. But local communities will not sit back and see their services destroyed. In this fight, we must take direct action such as occupying hospitals or schools.

The resources are there. But they are in the hands of the billionaires, not in our hands. We need to ask ourselves what sort of society we want – one where spivs and gamblers decide what happens or where the majority decides?

We face a huge challenge. We must rise to the occasion and act decisively in the interests of our class.

Motion passed at the 2012 TUC Congress

Public ownership of the banks

Congress notes the disastrous role of the banks over the past five years.

Congress condemns the scandalous levels of pay and bonuses for senior bankers, while workers are expected to pay for the economic crisis.

Congress condemns the interest rate-fixing by Barclays and other banks, which demonstrates again that the banking industry fails to operate in the interests of the majority of people.

Congress notes that despite the tax payer funded bail-outs and quantitative easing, the banks have failed to provide adequate lending and investment to assist economic growth and the creation of jobs.

Congress calls on the TUC to organise a thorough inquiry into the banking crisis. This should involve finance experts, trade unionists working within the sector and representatives of mortgage holders, small businesses and others affected by the crisis.

Congress believes that the de-regulated, free market model that has dominated for the past three decades has been exposed as a failure; a major change of direction is needed.

Congress believes the economic chaos and devastation sparked by the major banks and financial institutions should be ended through full public ownership of the sector and the creation of a publicly owned banking service, democratically and accountably managed.

Congress believes that the banking and finance industry should be developed as a key public service.

This new form of banking could play a central role in building a sustainable economy, investing in transport, green industries, housing, creating jobs and assisting the recovery in the interests of working people.