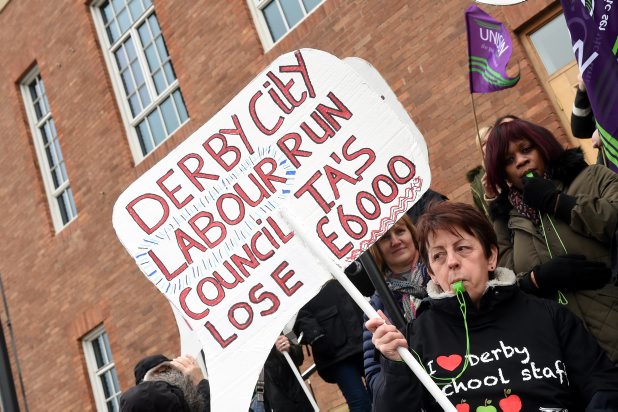 This motion backing the the Derby school support workers was passed at Broxtowe (Nottinghamshire) Constituency Labour Party’s GC meeting on 23 February. Please pass a similar motion in your ward, CLP, union branch or other organisation; make a donation; and call on Labour’s NEC to take action.

This Constituency Party gives its full support to the Derby Teaching Assistants after 57 days of strike action in their dispute with the Labour City Council to stop wages being reduced by up to 25% and their contracts being rewritten.

This Constituency Party is outraged and condemns the actions of Derby City Council.

We recognise that Derby City has faced massive cuts due to the Tory Government; however it should be taking the fight to them, not attacking workers’ pay. It should also be working with Unison about the matter.

We call on other Labour Constituencies and local MPs to do the same as we are and ask that the Party’s NEC condemn the Council’s actions which are bringing the Party into disrepute and damaging the Party’s electoral credibility amongst the low paid in this region.

• The CLP also donated £500 to the dispute fund.
• For more information on the Derby TAs’ struggle, see here.