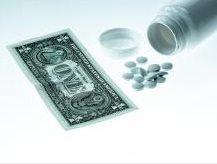 After my breast cancer surgery, the factors which indicate whether I would benefit from chemotherapy were inconclusive. There was one further test available. The Oncotype DX test examines the activity of 21 genes in the tumour tissue of patients with early-stage oestrogen-receptor-positive (ER+) invasive breast cancer and calculates whether chemo will be effective or not.

My score was low (14/100), and so, like many others since this test was developed a few years ago, I do not have to go through the puking, hair-losing agonies of fighting cancer by throwing poisons at it. So far, so good.

So, what’s the catch? My tumour had to be sent to the USA to be tested. This took a few weeks, which delayed the start of my radiotherapy, reducing its effectiveness of in preventing the cancer returning. Radiotherapy is supposed to start within six weeks of surgery; mine started twelve weeks after. Only time will reveal the impact of this delay – but it could mean that my cancer comes back when it would not have done so otherwise.

Why did the tumour have to be posted half way round the world? The Oncotype DX test was developed and is run by a private company in the USA called Genomic Health. The NHS has been using it since approving it in 2013 and has to pay for each test, at around £2,500 a go. In countries without a public health service like ours, individuals have to pay this fee, either straight from their pocket or via their insurance premiums. Or they don’t have the test. So either they have unnecessary chemo, or they don’t have chemo because they can’t afford that either, hoping but not knowing that it would make no difference to the likelihood of their cancer returning.

From this ready market of the sick and afraid, Genomic Health’s 2016 revenues topped $300 million.

Perhaps ironically, one of the benefits of the test is to prevent unnecessary treatment. In the USA, there is genuine concern about cancer being ‘over-treated’. In the UK, we would probably like to see more screening for breast cancer: for example, starting regular mammograms at a younger age than 50. But in the USA, the worry is the opposite: that women may be pressured into having more mammograms than necessary, to an extent that may even be harmful.

The difference between the two countries? In the USA, healthcare is a private market, where profit-making companies compete to pressure frightened patients into buying their products – whether medications or mammograms – and where the treatment you get depends on the content of your bank account. In the UK, we have a public National Health Service, which aims to provide treatments on the basis of need, but which receives inadequate funding from the government and shells out a portion of that to private companies such as Genomic Health.

Decisions on which treatments the NHS may buy from private companies fall to the National Institute for Health and Care Excellence (NICE), caught between the rock of insufficient funds and the hard place of profiteers’ demands. In December 2016, NICE declined a medication called Kadcyla, which prolongs the life of women with advanced breast cancer but which, at £90,000 per patient per year, was reckoned to be too expensive for the benefits it provides. Kadcyla is produced by Roche Pharmaceuticals, which made a core operating profit of 18.4bn Swiss Francs (about £14.5bn) in 2016.

These private companies are fully within their legal rights to refuse to share their medical breakthroughs with cancer treatment practitioners around the world, and instead to charge a fortune or to insist that every tumour to be tested is sent to California along with the fee, while patients wait impatiently.

The companies’ profiteering is not just lawful, it is the basic way in which capitalism operates. Capitalists own the means of production privately, and utilise them and workers’ labour to produce products that they can sell at a profit. Capitalism thus provides a drive to develop new technologies, tests and treatments, and so has brought massive leaps forward in healthcare. But it also puts a hefty price-tag on them and reduces their effectiveness by building division and delay into the process.

Individual companies’ research departments are doubtless working very hard to develop new treatments – even cures – for cancer. After all, a crock of profit awaits the business that strikes cancer-cure gold. But imagine if, rather than thousands of different companies’ laboratories carrying out separate, secret, similar research, they all worked together, pooling knowledge and planning their investigations, collaborating in search not of riches but of alleviating human suffering. What if a new test were developed and laboratories all over the world were allowed to use it? What if life-extending medications were made available to patients on the basis of need not cost? That would be good, wouldn’t it?

• Janine Booth is a socialist, feminist and trade union activist in the RMT union (formerly a member of its national executive) as well as an author and poet. She has been excluded from joining the Labour Party. Her website is www.janinebooth.com