In the February issue of Labour Briefing (not the magazine run by the Labour Representation Committee, but the other one of the same name), Labour NEC member Christine Shawcroft justified the coup against democracy in Momentum. In this article from Clarion issue 4, Lambeth activist Jamie Green replies.

Jamie stood on the “Grassroots Momentum: for democracy and socialism” slate which elected three members to the National Coordinating Group created by the coup. For his analysis of the new Momentum constitution which the coup is seeking to impose, which we published in issue 3, see here.

Somewhat bizarrely for a champion of “digital democracy”, Christine Shawcroft’s magazine does not have a functioning website! You can read an image of the article here. 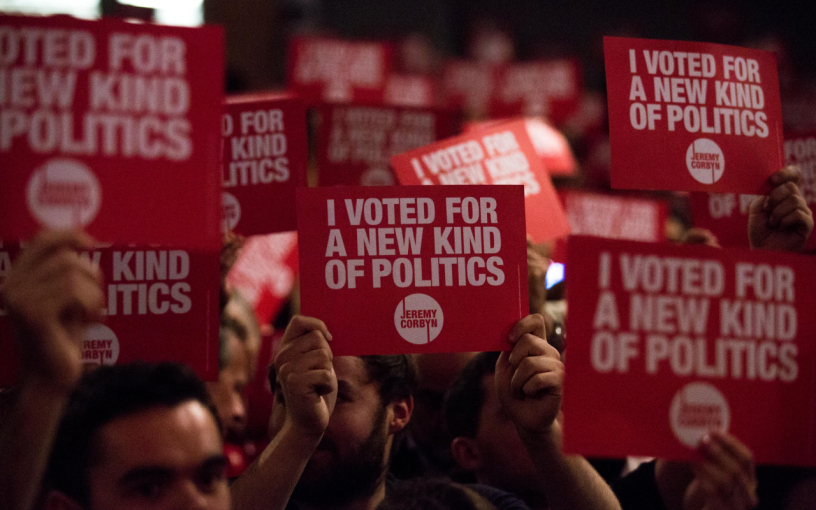 The recent decision by Momentum’s steering committee to implement a new constitution have sent shockwaves through the organisation and put a huge question mark over its future.

There’s been somewhat of a ‘shut up and get on with it’ line from those around the current leadership. Knowing they have the keys to the car (or the name on the private company that owns the data at least), they have been able to carry on without debating the underhand implementation of a new constitution too much. However, a rare break of rank was seen in Christine Shawcroft’s print-only article defending the coup in the Labour Briefing.

Her piece defends the actions of Jon Lansman et al and the new rules they have ushered in. Despite its small circulation, I believe some of the article’s key points deserve to be aired and duly critiqued.

The coup is justified by Christine in the ways we’ve come expect. She runs a cliched narrative about proverbial ultra-leftists wanting to split the organisation. Ironically, this ‘Reds under the bed’ tactic is often used by the Labour right.

She claims about the left groupings in Momentum: ‘…they were only interested in building their own little group and wanted to use Momentum to do so’. She is not specific about who she is referring to, nor does she cite any evidence for her claim, such as a specific encounter or an article that would suggest this.

This is typical of the tactics employed by the wider leadership in this debacle – creating anonymous common enemies (usually just labelling all such dissenters as ‘trots’ – again a popular trope by the right) and attributing negative intentions to them. However, I am yet to see any evidence that any left groups are conspiring to make Momentum split off into a political party to rival Labour as is suggested by the likes of Laura Murray and Owen Jones.

The other justifications for the implementation of a diktat constitution are that a third of members live in areas without a local group and, more bizarrely, that the behaviour of ‘the ultra left’ at a National Committee meeting in Birmingham (where Shawcroft’s faction lost a key vote) meant ‘…something had to be done’.

On the former, Christine doesn’t consider a) The possibility that Momentum should work to build more groups to overcome this, and b) that it’s patently untrue to say that a lack of groups makes having delegates or representatives structures impossible. In the NC meeting she cites, there were delegates present in the room who represented areas without a group.

Shawcroft’s wider narrative is crammed full of dishonesty. For example she claims that members approved the new constitution when they were in fact told to quit if they were against it. Such dishonesty is rife throughout the piece, particularly so in her appraisal of the new system of governing Momentum.

Shawcroft states that the new constitution is what is needed to deliver a Jeremy Corbyn government. However, she offers few clear direct reasons why. The closest justification given is the claim that newly engaged activists entering the organisation following Corbyn’s victory wanted a movement organised by digital democracy. She, again, does not follow this up with any tangible evidence. She does however cite the survey circulated by head office as proof that members wanted the new constitution. There are a few problem with this idea:

Firstly, anyone who’s done even the most basic level of study in methodologies will tell you that surveys are tricky things to write if you want accurate data. It is, of course, far too easy to write questions that nudge participants in one direction or another to suit what you want to find. The main basis for OMOV derives from a survey question on how ‘key decisions’ should be made, that offers a binary choice and where there is a clear imbalance and lack of neutrality in the wording of these choices. For example, the leadership’s preferred option, uses positive words like ‘accessible means’ which isn’t featured in the other option. This was likely, intentionally or not, to send users one way.

Secondly, as I outlined in a previous article, the new constitution offers anything but member-led democracy and it certainly does not offer a federal form of democracy as Shawcroft claims. In reality, the new governing ‘National Coordinating Group’ makes nearly all key decisions and 60% of seats will be taken up by external bodies such as Jon Lansman’s blog ‘Left Futures’, rather than members or representatives from groups.

Shawcroft ends her article by asserting ‘…we need to build Momentum as a democratic, member-led organisation’ and that ‘All members and groups are welcome to take part’. Seemingly she does not get the irony of claiming to be the champion of democracy in one breath and, in the other, welcoming groups and members to get involved with something where the parameters, rules and structures have already been decided without them.

However, this is likely indicative of the Lansmanite plan to run Momentum – with a small group at the top, deciding the campaigns that members should spend their time on or the slates they should vote for inside Labour. What she and the current leadership do not understand is that this will not empower or enthuse members and it will not get them active. It certainly will not build the movement needed to transform the Labour Party and wider society and this trajectory will likely result in Momentum resembling the many failed left groups of the past.

The Momentum coup has winded a once buoyant organisation in which many of us have put much hope and hard work into. The effort put in by the leadership of asserting their dominance and implementing their constitution has diverted time and resources away from campaigning on key issues like the NHS crisis or building for the many huge battles that face us inside the Labour Party.

Following the coup many Momentum groups have continued to report a downturn in activity and attendance at meetings. History will not look kindly on us if we botch the amazing chance we’ve been given to shape Labour and make socialist politics a force in the UK, especially if it’s lost due to factional wrangling predicated on a fight against the manufactured ‘enemy within’.

Christine Shawcroft, Jon Lansman and the like may yet have won the battle of Momentum’s direction and got their hands on the steering wheel. Their scaremongering against the left has ultimately weakened our collective hand and put us back into first gear.