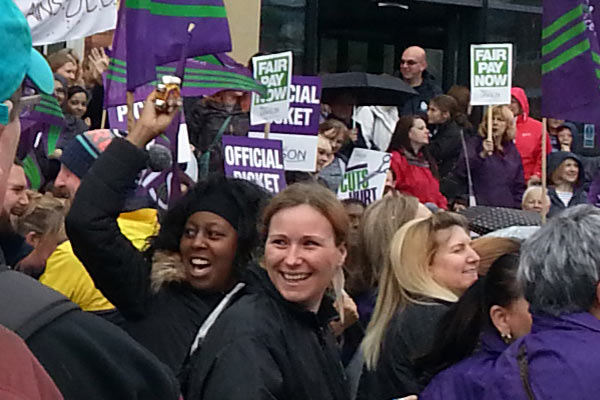 Derbyshire Momentum has thrown its weight four square behind the Derby Teaching Assistants in their dispute with Labour-led Derby City Council. The TAs have been striking since June 2016 against the council’s imposition of a “fair pay” review which will cause some workers to lose a quarter of their annual pay packet. From 27 February they will begin a five day strike.

In Derbyshire Momentum, we believe that Labour Councils can and should be at the forefront of resistance to the Conservative austerity agenda. We ask the council, working with the unions, to find a solution to the dispute.

Broxtowe Momentum activist Pete Radcliff adds: My CLP, Broxtowe, has written to the NEC calling for it to discuss the dispute and consider action against Derby council. Jeremy Corbyn has stated support for the TAs – he needs to act on this urgently.

Sue Bonser, Unison Schools Convenor for Derby City Council, told The Clarion: “As schools convenor for DCC my number one priority here and now is supporting our members in their campaign. However my wider concerns are for the future of the Labour Party in Derby. Derby has always been an industrial town with a strong Labour and union background. Other parties including UKIP are now moving in and convincing not only our members but the wider traditional Labour voters that the Derby Labour Party is not a party that represents them. This is a difficult-to-defend position at the present time. I am ashamed that only one Labour councillor has come out openly in support of our struggle.”