The Momentum office held a Christmas social on 15 December at the Amersham Arms in New Cross, Lewisham, as a fundraiser for refugee and migrants’ rights organisations. Speakers included Jeremy Corbyn – and Lewisham Momentum activist and Brockley Labour LGBT officer Maisie Sanders (below, at another event).

Most of Maisie’s speech is below. You can watch the video of her speaking on the Lewisham Momentum Facebook page here. 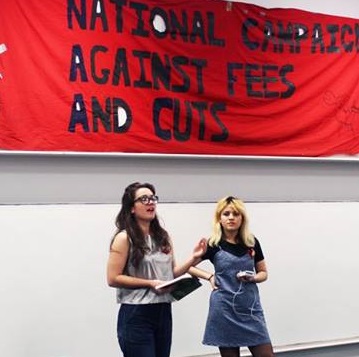 “…I’d like to tell you what Lewisham Momentum has been doing about migrants’ rights, before saying a few words about why this is so important.

“Our Momentum group has taken these issues seriously from the start. We have discussed them several times, raised them regionally and nationally and helped to shape Momentum’s national policy. Our November general meeting featured two speakers on migrants’ rights, one from anti-detention and deportation campaigners in Movement for Justice and the other from Lewisham Migrant and Refugee Network who we’re supporting tonight.

“At that meeting, everyone wanted to do more, so we set up a working group to lead campaigning on this… Ideas so far include a model motion to put in every Labour ward and CLP; mobilising people for migrants’ rights actions including the demonstrations at Yarls Wood detention centre; more fundraising events; and establishing a welcoming committee for the Syrian refugees Lewisham council plans to house in the borough. We also plan to campaign against the council taking money from the government pot which is only available to councils willing to collaborate in new anti-migrant measures.

“It would be great if every Momentum branch could set up a migrants’ rights working group. We can exchange ideas and coordinate.

“We’ll be organising our own campaigning, but what the Labour Party says and does will be crucial. We want to mobilise Labour around this, and we can only do that if Labour has a clear pro-migrants policy. Labour’s position has enormous political importance.

“In Britain, as in many countries, agitation against migrants has becoming the cutting edge of political reaction. Right-wing populists want to divide people on the basis where they come from – and the pressure for left-wing parties to go along with this immense. It’s obvious that our party is coming under this pressure too.

“Playing this game, which Labour before Corbyn played for far too long, will only strengthen the right and cut the ground from under our feet. It will help shift politics further and further rightwards. It also involves lying to people. We need to stand firm and tell the truth: that low wages, insecurity, unemployment and cuts are not the result of immigration; that they are the result of an offensive by employers and their government against all workers; and that only united struggle for more resources and better jobs, homes and services by workers regardless of background will change things for the better. We need to defend and fight to extend freedom of movement.

“As Jeremy told the Socialist International in Prague last week: ‘I have every confidence that the principles of solidarity, internationalism and socialism can win… Our rhetoric cannot be used to legitimise the scapegoating of refugees or migrant workers’. It’s great that Jeremy has come tonight, but I’d urge him – don’t give into the pressure. Stand firm and work harder for Labour to lead a fightback which can build solidarity and unite people against the real enemy.”