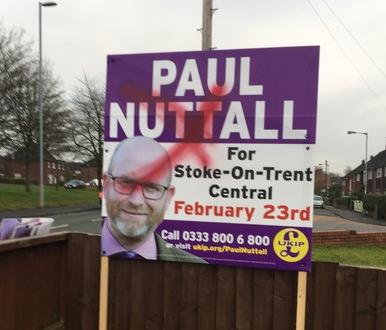 Understandably, considering the way these by elections have been built up in the media and by the political commentariat, a lot of people want to know how it’s going in Stoke.

While the bookies have Labour and UKIP more or less level-pegging since the #FakeNews about the Leave.EU “poll” that showed UKIP winning, and despite almost two years of consistent UKIP decline at the polls, there are still plenty of people in the media happy to talk the Kippers up. Despite Labour being the only alternative to the Tories nationally, it seems even the smaller “progressive” Parties have no problem joining in these attacks – despite the very real danger that they will allow a pound-shop fascist in by the back door.

Hundreds of Labour activists have been out speaking to voters in the largest drive I can recall in recent years. Comrades who’ve been out many more times than me say the talk of a UKIP surge is just that: talk. While Labour is finding UKIP voters out there, there is no evidence of a mass transfer away from either ourselves or traditional Tory voters. Our pledges seem to be holding up, and every sign shows that this is the same for the Tories. If anything, there seems to be a small shift away from UKIP and towards Labour.

Areas which were strongholds for the BNP in the early to mid-1990s are still those with the coolest reception for us, but the mood is much different from those dark days. Back then canvassers would often be threatened and attacked, and while there have been isolated incidents of abuse, and one physical confrontation where a local anti-racist campaigner was assaulted, overall things are much better than they used to be.

In contrast to recent elections there also seems to be a decent visual Labour presence by way of posters and garden boards, with some areas almost exclusively sporting the bold red that shows Labour is far from irrelevant to local voters lives.

While some have grumbled at the social media campaign, and others have questioned the ground operation, I can honestly say that things are solid despite some inevitable hiccups. We have managed to deliver literature to over 30,000 households each week, run three daily canvassing sessions across the City six days a week (and two on Sundays!), and it has been many years since Stoke Central CLP had such high levels of activity and up to date contact data.

In contrast UKIP seem to be relying on their friends in the media to do the hard work for them, and despite running national campaign days they just don’t have the people, infrastructure or local knowledge to be as effective as Labour. Poncing around like a country gentleman in Tweed flat cap and jacket, Nuttall shows no signs of understanding the local issues that matter, and clearly has no inclination of representing the people of Stoke should disaster strike and he win. Stoke is merely a stepping stone for this man’s career – and if anyone is a career politician, it is Paul Nuttall.

On Radio 4 and on the local 6 Towns Radio, he was asked and couldn’t name the six towns that make up the city. He’s had three attempts now, and failed at every one – does this suggest a man who is dedicated to Stoke? He’s been forced on the defensive again and again about his lies. Apparently the whopper about him “being there” at Hillsborough is really true, honest guv, and people who don’t believe him are “total scum”.

But just because UKIP are running a poor campaign is no reason for complacency. With the general tone of political debate vomited out of the broadcast media and off the pages of the press doing their job for them, Nuttall and Co. don’t need a well-run campaign because they’re swimming with the stream. Every copy of the Daily Mail, Daily Express, Daily Star, and Sun sold in Stoke-on-Trent Central does a more effective job of making UKIP’s case than UKIP itself ever could – especially given their canvassers don’t even know their own policy (as we discovered when challenging them to debate when our paths crossed!)

Make no mistake, this election is crunch time for the Labour Party in Stoke and more widely – but win or lose, we won’t be going away anytime soon, and local members won’t allow the upsurge in activity to just fizzle out after the election. The hard work of rebuilding in those communities has begun, and we must never falter from that task again.

Come and help us in the final push for the election.

• Chris, who is a supporter of Red Labour, is a party activist and councillor in neighbouring Newcastle-under-Lyme, who put his name forward for the Stoke Central candidacy but was not included in the selection by the Labour Party machine.

• For Momentum’s organising for the Stoke Central election and to get involved, see here.