People started posting fake news on the internet, what happened next will astonish you…

In the last year, “fake news” sources and their ability to potentially shape politics have come to international attention. The extent to which fake news websites had a significant impact on the 2016 US Presidential election is being debated. Online platforms like Facebook have come under pressure to starve fake news sites of revenue and views.

In America the discussion of fake news often focuses on rightwing websites like Breitbart. Left-leaning liberals scoff at the stupidity of those who share stories claiming Barack Obama was born in Kenya and suchlike. But remember that meme claiming that Donald Trump once called Republicans “the dumbest group of voters in the country”? Guess what – that was fake too. In this country, after last year’s local elections, the following map was shared on social media by a lot of pro-Corbyn people. 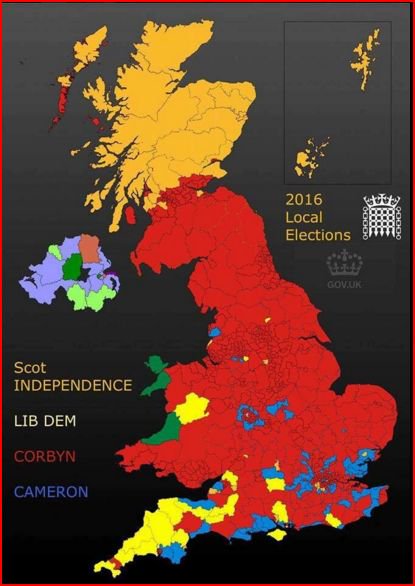 The only problem? What the map claimed to show was total invention.

We’ve all done it at least once; shared a story from a satirical website and commented as if it’s real, or accidentally shared an article from two years ago without checking the date. But the map above is so demonstrably false, if you care to look at it for longer than about a second, and it’s worrying that so many people are willing to click and share something like it without undergoing the most rudimentary fact-checking.

There are gradations of fakery on the internet. At one end is stuff which is simply made up, often as a commercial exercise to earn money for click-farm websites. There is also a preponderance of sources pumping out stories which are sort-of-true but written underneath exaggerated, alarmist headlines which blow them out of all proportion (à la The Canary in this country). And, of course, there are the structural and political biases which lead the mainstream press, tabloids in particular, to publish all those tiresome attack stories about Jeremy Corbyn that we’ve become so familiar with.

Trust in the “MSM” is so low that the “fake news” epithet is easily thrown back at them. But Tom Watson is right to say that “…the solution [to media bias] does not lie in the creation of a form of pseudo-journalism that is even more biased, less rigorous and often based on downright lies.”

We are rapidly approaching a situation where all sources are equally mistrusted, so you might as well pick your own “facts” to suit your existing point of view. “Even if this meme about the Tories isn’t entirely true,” you’ll think to yourself, “It’s exactly the sort of thing you can imagine them doing. So what’s the difference?”

This is incredibly dangerous, because there is such a thing as journalistic rigour, and there are such things as facts. If we on the left don’t stand for a political discourse based on reason and reality, then who will?