Simon Hannah reviewed The Candidate by Alex Nunns – and spoke to the author. 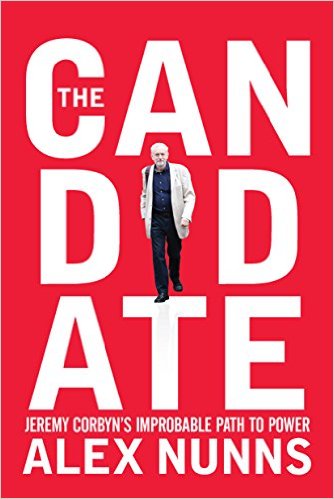 Nunn’s book is a blow by blow account of the leadership election, full of useful insights, funny anecdotes and some pretty solid analysis.

Granted top level access to almost everyone who was involved in the historic leadership campaign of 2015, Nunns’ book is an insider’s account, but crafted from interviews with both foot soldiers and the generals.

Like many of us inspired by Corbyn’s victory, Nunns is only a recent recruit to the Labour Party. It is a testament to his journalistic skills that he manages to paint a picture of the internal working of Labour that reads like someone who has been in the party for years – giving a voice to veterans like Jon Lansman and John McDonnell certainly helps in this regard.

Nunns was pleasantly surprised at the reception from his book. “It was much better than expected”, he admits when I met up him after an LRC meeting where he was giving a talk. “The people in it reacted well to it, even more critical people praised certain elements.” What about the press? “Reaction of the mainstream media was more muted. The Guardian didn’t review it, but Stephen Bush in the New Statesman was favourable, though he referred to it as a ‘court biography’.” Earlier in the LRC meeting Nunns had joked that having a chapter slamming the mainstream media probably didn’t help the reviews.

When asked about his concerns after Corbyn won in both 2015 and 2016 (the failed PLP coup is also dealt with in the book) Nunns paints a picture of a precarious moment caused by the lack of engagement from Corbyn supporters. “The last nine months shows the danger of putting in a left leader in charge of Labour. People are good at getting Corbyn elected, but it is the less glamorous, more painstaking work in the branches, at the conferences, the building outwards, as well.” Behind every revolution is the threat of a counter-revolution: “looking at the NEC vote in 2016, the rights vote went up massively, not as much as the left of course, but you can’t write them off”.

The stories told in The Candidate are useful as an account of the different dynamics and motions or how the planets aligned to deliver such an astounding left victory – but they also reveal some of the dangers in the campaign team’s approach. Some of it was very ‘top down’, mainly phone calls with general secretaries and big shots. It also shows the particular nature of Corbyn himself — the right wing MPs allowed him on the ballot precisely because he was seen as a mild mannered, consensus politician. It is inconceivable that John McDonnell would have got anywhere near the 35 required nominations. This points also to the precarious nature of Corbyn’s victory – après Jeremy, le déluge – who could possibly replace him if he was ousted?

The spontaneous ‘no one was ready for it’ nature of Corbyn’s victory also offers some hope for any elections “That this happened when people least expected it, that is a cause for hope in a general election. Yes, the polls are bad, but we are in an unusual time, the unexpected is precisely what can happen.”

I ask what needs to happen going forwards. Nunns has a clear vision based on the excitement of the story told in The Candidate “2015 was so brilliant, so many people were enthused because they felt for the first time they could change the direction of national politics. People went to rallies, recruited their friends, argued with journalists on social media and they backed Corbyn against the establishment to change Labour.

“We have to recreate that collective project – get the excitement back again.”

• The Candidate is available from OR Books: www.orbooks.com