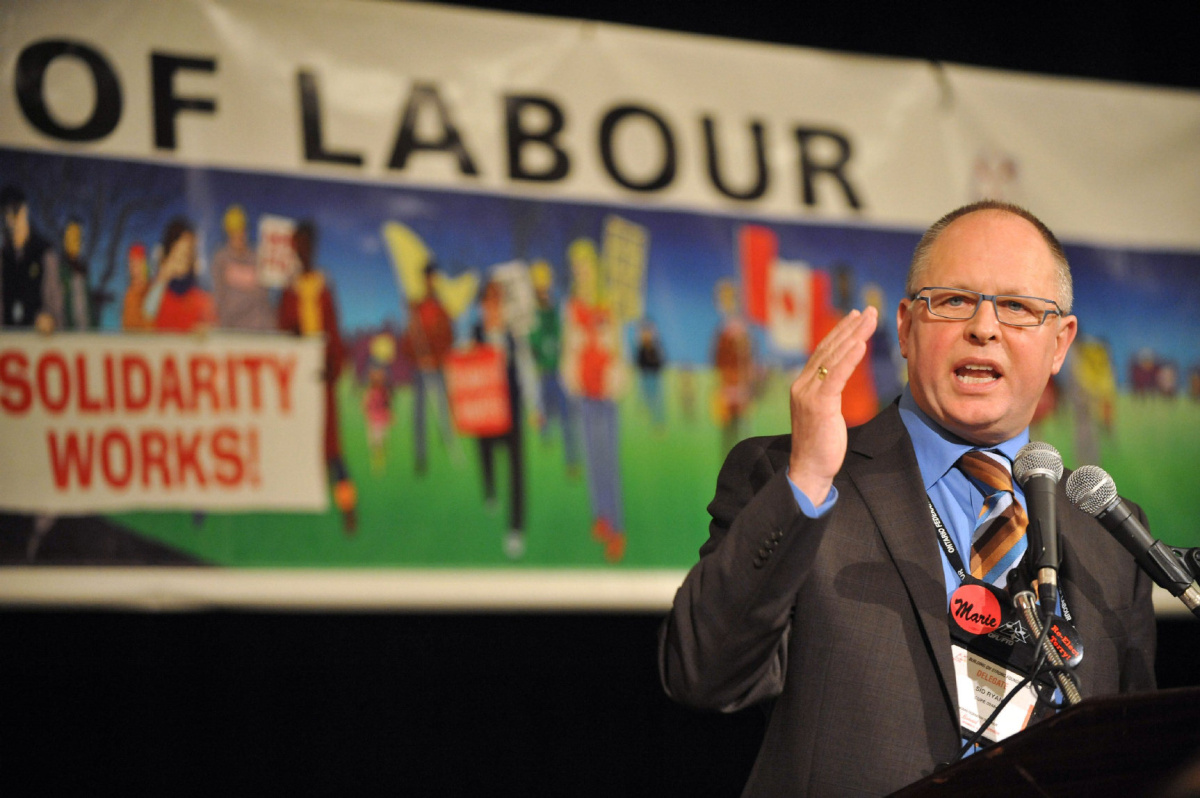 In December Clarion editor Michael Chessum visited Canada on behalf of Momentum, and met with Sid Ryan, an Irish-born trade union leader who may be running for leadership of the New Democrats, the Canadian equivalent of the Labour Party.

It has been a tough few weeks for progressive politics in North America, but it has been better for some progressives than for others. Just as Donald Trump’s inauguration marked the beginning of an entirely new era in world politics, complete with bans on Muslim immigration and attacks on reproductive rights, a new protest movement woke up. If the juxtaposition between the failure of Hillary Clinton’s presidential run and the massive, defiant demonstrations that swept across the western world has illustrated anything, it is that the alternative to Trump will come from a new insurgent political movement, not the centrist liberalism that has dominated electoral politics for decades.

North of the border in Canada, there is as yet no successful rightwing demagogue drawing mass support from disenchantment with globalisation, but here, as across the western world, the same process is underway. The shine is slowly coming off Justin Trudeau’s Liberal administration after more than a year of post-election honeymoon, which has witnessed a gender balanced cabinet, steps to legalise marijuana, and nods towards electoral reform – but an economic programme still wedded to free trade deals and the construction of gas pipelines. What Canada also lacks is its own version of the new insurgent leftwing politics, something comparable to Bernie Sanders or Jeremy Corbyn.

That may be about to change, if leftwing activists in the New Democratic Party have anything to do with it. The NDP is Canada’s Labour party, with a similar structure of trade union affiliates, and was briefly on course to win the 2015 federal elections. When it came a surprise third, members blamed the party’s centrist leadership and removed its leader, Thomas Mulcair, triggering a leadership race. Now, Sid Ryan, a leftwinger and one of Canada’s most prominent trade unionists, is considering a run for the NDP leadership.

I met Sid Ryan in December while in Toronto. Ryan is a first generation Irish immigrant with an accent to prove it. Having moved to Canada from a working class district of Dublin in the 1970s, he began work as a plumber and pipe fitter in a factory in East York, Ontario. His early politics was informed by the realisation that while a large part of the workforce was Caribbean, “there were no people of colour in any of the management positions at all. So it was black activists who got me into politics,” he says. On his last day at the plant, in October 1976, he organised a walkout against wage policies being imposed by then-prime minister Pierre Trudeau, father of Justin.

The rest of Ryan’s CV follows a similar vein. He then spent 17 years working for Ontario Hydro in a heavy water nuclear facility, eventually rising from the shop floor to become president of the Canadian Union of Public Employees and then leader of the Ontario Federation of Labor, Canada’s answer to Britain’s Trade Union Congress. Unlike in the UK, NDP leaders do not have to be current members of parliament. So although Ryan has run and lost five times for the NDP at provincial and federal level – often narrowly and performing well in key rust-belt constituencies, his supporters point out – he has yet to hold office. The result is a candidate who, even more than Sanders or Corbyn, is a genuine outsider, having never served as a frontline politician.

Ryan is quite straightforward about these outsider credentials; if anything, they are his biggest selling point. He describes himself without hesitation as “a radical and a grassroots socialist”. “If you’re going to have someone like Trump, who turns things upside down from the right, you need someone to do it from the left as well – with a bold socially progressive programme”, he told me. “People are hungry for that kind of leadership.”

Asked to describe the most important moments of his career, Ryan is about as far away from the script of respectable politician-speak as it is possible to be. He talks in excited terms about his role organising workers during the anti-globalisation movement and the Battle of Seattle in 1999. He is equally animated about his leadership of the campaign against Bill 136 in 1997, legislation which would have curtailed the right to strike across Ontario – and which was beaten back by co-ordinated strike action and marches on the legislature.

The radicalism and direct action of Ryan’s past are matched by a number of his current policy proposals, many of which would be recognisable to a follower Corbyn or Sanders. Ryan’s supporters have drawn directly on Jeremy Corbyn’s pledge for a National Investment Bank, promising large scale public sector borrowing to build homes and create jobs. He promises to make the NDP “the centre of popular resistance to neoliberal policy”, linking the electoral project directly to social movements. Much like Corbyn’s offer for ‘left behind’ Britain, Ryan’s platform directly addresses the rust belt – promising to reverse decades of free trade agreements and underinvestment.

In the Canadian NDP, as in the British Labour party or the American Democrats, the point of this kind of radicalism is not abstract – it is about becoming electable again. “I remember the exact day when the NDP lost the (2015 federal) election,” says Ryan. “It was when we committed to a balanced budget. The result was that the NDP looked just like the Tories, while the Liberals promised to borrow and invest billions.”

This is, to be fair to Ryan, not too much of an overstatement. Following that announcement by NDP leader Tom Mulcair in August, the Canadian Liberals promised to run a deficit, with Justin Trudeau recording an infamous election video in which he attempts to walk up a down-moving escalator, comparing the experience to the NDP’s promised public funding cuts. The NDP then went from first to third in the polls in mid-September, and stayed there until polling day on October 19th.

In the context of constant domestic turmoil, developments in the Canadian NDP may seem a distant thought for a British audience. But the potential candidacy of someone like Sid Ryan should serve as a reminder to the British left of the role that it is now playing. Across the world, leftwingers and progressives are looking to the Corbyn project for inspiration – and that inspiration is a two-way street. If Corbyn won an election, he would need allies around the world; and if he is to get anywhere near power, leftwing activists must be able to feel a part of a global movement for radical change in a polarising world. With Donald Trump in the White House, we will need those international alliances more than ever.