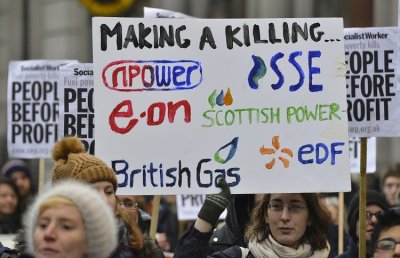 By an Npower worker

Last week, Npower, one of the Big Six energy suppliers, hiked their electricity price by 15% for electrcity and a 4.8% for gas for customers on their variable rates. This is the largest single hike by any of the Big Six since at least 2013. If past experience is anything to go by the rest of the Six will put their prices up too in the next few months.

Npower bosses argued this price rise was forced on them by the wholesale price of energy and “regulatory costs”. However this has even been questioned by government regulator Ofgen, who last month said there was “no justification” for a price hike. Indeed Npower made £67 million in the first half of 2016. At the same time they made a commitment to the markets to cut 2400 jobs at Npower and among outsourced workers.

There has been a rise in wholesale energy costs over the last six months, but that’s from a relatively low base; and hardy any of the fall in energy prices in 2014-15 was passed on.

2014 is the last year we have complete Fuel Poverty Statistics. In 2014, the number of households in officially defined fuel poverty in England was estimated at 2.38 million, representing approximately 10.6 per cent of all English households. This was an increase from 2.35 million households in 2013. For the poorest the government’s attacks on welfare such as the benefit cap and universal credit will just make the situation worse. For pensioners and the chronically ill fuel poverty kills.

Caroline Abrahams from AGE UK said last winter: “The UK has an appalling record on cold-related deaths, with one older person dying every seven minutes from the winter cold. Colder countries like Sweden are better at protecting older people from the cold. Many older people will be feeling anxious about the current cold snap, not least because high heating costs are prohibitive for many, resulting in large numbers of older people finding it virtually impossible to stay adequately warm”.

In response, Shadow Chancellor John McDonnell condemned the increase but only talked about a price cap. Whilst a price cap would be welcome, it wouldn’t resolve the fundamental issues. When Jeremy Corbyn stood for Labour leader in 2015 he argued – on and off – for the nationalisation of the energy sector. Labour has since gone quiet on this front. Sometimes it argues for a confused policy of promoting small-scale and muncipal energy production, at other times not even that.

This is a mistake. There is an urgent need to sort out the byzantine energy sector. Heat and warmth are basic human needs that are being denied to millions by the profiteering of the few. Labour should commit itself to the democratic public ownership of the Big Six and the rest of the energy sector – reorganised as part of a plan to tackle climate change, save and improve jobs and deal with fuel poverty.

• A new campaign has been launched around these issues – see nationalisethebigsix.com and www.facebook.com/nationalisebig6