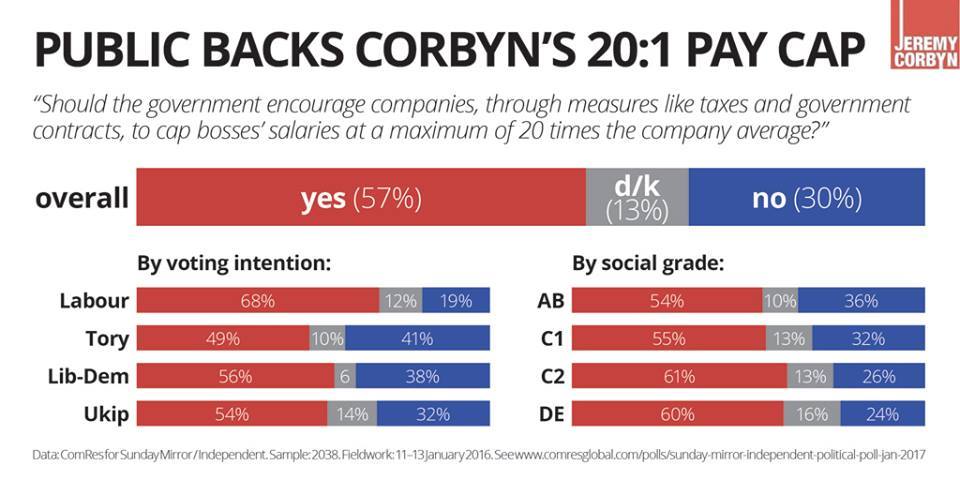 For some, Jeremy Corbyn’s suggestion that a national maximum wage should be established is a ridiculous idea. For example, the economist Danny Blanchflower, formerly of the Bank of England, called the proposal a “totally idiotic unworkable idea”. The suggestion that a future Labour government would be unable to institute a wage cap may strike many as odd, particularly since the current Conservative government has proved quite adept at introducing various kinds of caps. The cap on public sector pay rises and the benefits cap are proving eminently “workable”. Indeed, austerity is, in effect, one big cap.

Corbyn’s wage cap proposal could thus appear entirely congruent with contemporary governmental practice. So, what distinguishes Corbyn’s wage cap as “totally idiotic”? The answer is clear. The maximum wage would institute a break with a key slogan of neoliberalism: freedom for the rich, discipline for the poor. On this understanding, the well-being of the mass of the people is contingent on the wealthy few being free from state regulation. The flip-side of this freedom is the deployment of state power to combat centres of working class power, force the unemployed into the labour market, and undermine the collective provision of services.

Turn the tide of neoliberalism

Neoliberalism is, in this way, a revolt of the rich against the collective regulations and controls imposed on them in the post-war period. Corbyn’s maximum wage proposal hints, in turn, at an attempt to turn the tables on the rich. The maximum wage posits the use of the power of the state against the wealthiest few; it demonstrates that Corbyn countenances “despotic inroads on the rights of property”, as Marx put it. From the perspective of neoliberalism, this is the “idiocy” of the maximum wage demand. From our perspective, however, the demand points to a breach with a dominant logic of politics in Britain today.

The question for socialists is how to ensure that this potential breach in the edifice of neoliberalism is not quickly patched up by our opponents. The central task, in this regard, is to forge an alternative ideological climate within which the maximum wage demand makes sense – a climate within which any other course of action seems “totally idiotic”. Specifically, the idea that the rich – or, to use their preferred term, the “wealth creators” – deserve their elevated position within British society must be tackled head on.

To this end, we must work to identify those who have benefited most from neoliberalism as the enemy. There is a need to name this enemy – “the 1%”, “the billionaire class”, or even “the establishment” spring to mind – and then declare it responsible for the various crises – relating to the economy, employment, housing, education and so forth – facing the mass of the people today. In other words, as Richard Seymour has recently argued, Labour should “articulate a class hatred sincerely and effectively”. The maximum wage will, by virtue of such ideological work, become comprehensible and appear as a viable solution to a set of pressing problems.

Pressure from the right

It should be recognised, however, that there will pressure on Corbyn not to engage in this form of political struggle. We will be told that something more “workable” than the maximum wage is required – that is, a pragmatic policy that challenges nobody. Indeed, over the course of January 10, the maximum wage morphed into a call for pay ratios and restricting the cap on earnings just to the bosses of government contractors. While such attempts to work out the details of the policy should not be rejected, the demand for a maximum wage has value only insofar that it is presented as a threat to the rich. Hence, any attempt to derive concrete policy proposals from this demand should serve to highlight its antagonistic character rather than obscure it.

The maximum wage has the potential to help restructure some of the dominant ideological coordinates of contemporary British politics. However, Corbyn’s announcement, on the same day, that Labour is “not wedded” to freedom of movement has no such potential. These comments on immigration represented a partial capitulation to the emerging conservative-authoritarian common sense on immigration. The fact that Corbyn’s announcement was “welcomed” by Labour MPs Caroline Flint and Stephen Kinnock, who have been willing to reinforce the themes of the racist right, is testament to this.

What we need, therefore, are more “totally idiotic” demands from Corbyn, like the maximum wage, and fewer “welcome” ideas, like the restriction of freedom of movement.