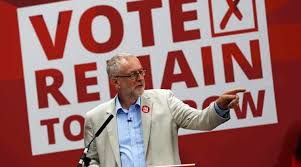 Jeremy Corbyn¹s three-line whip on triggering Article 50 has produced another spasm of anti-Brexit feeling on the Labour left. Indeed to such an extent that many are siding with the 47 Labour MPs who broke discipline to try and sabotage the referendum vote to leave.

We should remind ourselves that both Conservatives and Labour under Harriet Harman backed the referendum, while making clear that its decision would be respected. Some 33.5 million people, 72% of the electorate, turned out to vote after a three-month campaign and almost 52% of them, 17.4 million, voted to leave.

Triggering Article 50 is the only way to fulfil that decision which is why Jeremy Corbyn was absolutely right, after a thorough shadow Cabinet discussion, to commit Labour to supporting it. Despite this sections of the “remain” left inside the LP continue to express shock that Labour supported the Article 50 motion in parliament. It would be more sensible to express shock that so many Labour MPs disregarded a national referendum vote that most of them had supported.

Many of these MPs put forward the usual arguments, that they are not “delegates” but “representatives” ­ that is they don’t have to abide by what their constituents or national electorate want but what they “judge to be
right”. In any other circumstances you would find the left denouncing such elitist and undemocratic sentiments but it seems many socialists in the LP are willing to countenance any behaviour of MPs as long as it negates the referendum result.

Not only is this classically short sighted, MPs will throw this back at the same left every-time they trample on their Constituency Labour Party’s policies, but it is dangerously undemocratic ­ if socialism from below means anything it means abiding by majority decisions even if you disagree with them. No one is saying people need to roll over in front of a Tory framed Brexit but we have to honour the referendum result which means voting through Article 50.

The real threat is UKIP

While sections of the LP left are still obsessing about Brexit and how to avoid it, they seem blind to how such a position fuels a growing right-wing populist movement on their doorstep.

Every time Labour MPs or LP members show contempt for the result of the referendum, and often as well for the people who voted for Brexit, they play into the hands of UKIPs argument that an “unaccountable Westminster elite” ignores and denigrates ordinary people. Any serious attempt by parliament to reject the referendum result would cause a mass upsurge in support for this racist party.

All surveys show that UKIP is eating away at a whole section of the working class that has traditionally been the bedrock of Labour support in the north of England. The “left behinds”, as political sociologists call them, are the manual workers who worked in the traditional industries – steel, mining, engineering, consumer goods production. Their jobs have been swept away by a globalised neo-liberal capitalism as bosses have moved industries abroad to benefit from cheaper labour, predominantly to China and SE Asia. Savaged by Thatcherism and ignored by a New Labour Party wedded to neo-liberalism, these groups of workers are open to the sort of populism that has just swept Trump to power in the USA.

Their wages have declined, along with their job security, the availability of decent jobs and the bonds of trade union solidarity. Over the last decades they believed no one cared about their plight, certainly not Blair’s Middle England and metropolitan obsessed LP. They were, and are, open to populists who come along offering simplistic solutions and blaming immigrants for their problems. We know the refrain “East Europeans are taking the few jobs there are and forcing down wages, the schools and hospitals are over run by foreigners, refugees and immigrants are always first in the queue for housing, Muslims are taking over, the English culture and civilisation is under threat.”

These arguments helped UKIP increase its vote from less than a million in 2010 general election to nearly 4 million in the 2015 election ­ nearly one in eight voters. Only the undemocratic first past the post system prevented UKIP from sweeping into parliament with a large body of MPs rather than the they got. The thoroughly disgraceful Brexit campaigns just reinforced this racist scapegoating with their anti-European and anti-immigrant propaganda.

Now we face the threat of another breakthrough for UKIP in at least one of the by-elections this month, in Stoke on Trent where UKIP came second in 2015. It is classic “left behind” territory, declining industries, poorly paid jobs, high unemployment. Worse it is still a Blairite dominated LP that has fielded a right-wing candidate deeply hostile to Corbyn and his socialist policies.

UKIP meanwhile has fielded their new party leader Paul Nuttall who has been arguing that UKIP needed to orient to disillusioned Labour voters. As far back as 2007 he penned an article entitled “How and why UKIP can attract the Old Labour vote”. Like Trump he will offer a mixture of right-wing nationalism and anti-immigrant racism combined with promises of more and better jobs and better services for the “hardworking Englishman”.

The victory of Trump in the USA and the advances of the far right in many European countries shows that the Labour left, despite its strength and growth over the last period, can take nothing for granted when it comes to a dangerous resurgent right. Corbyn’s Labour should have all the tools at it’s disposal to see off a challenge from UKIP – an anti-capitalist critique of neo-liberalism that points out the ability of the multi nationals and the super rich to avoid taxation, the failure of the British ruling class to train workers and invest in growing industries and infrastructure especially in the “left behind” areas, the deliberate bleeding dry of the NHS and increasingly the education system by growing privatisation and PFI schemes,
the scandalous cuts in social care for the elderly and local public services
generally.

Labour needs to lay the blame for social deprivation squarely where it lies, not with migrants, but with the rapacious capitalists and with successive governments that have done their bidding. A simple programme involving massive regeneration, house building, workers re-training, expansion of health and education, all paid for by making the bosses and the super rich pay proper taxation, would undercut the nasty racism of UKIP once and for all.

It is fighting for the LP and trade unions to take up these demands that is the key issue for the left today, not fretting about Brexit – that is a ship that has already sailed.