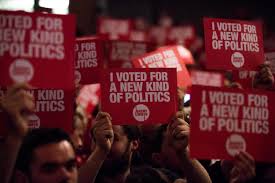 Approximately 20 committee members in attendance at the 28 January National Committee with a number of apologies. There were also over 30 observers mostly from London though also a number from further a field. With apologies it seemed that approximately half the the National Committee supported this meeting going ahead including members from FBU, RL and LRC, LGBT+, Disabled, Womens and Black Connexions and the majority of English Regions sent all or some of their National Committee representatives.

The day began with general discussion on the political landscape, by election and the Labour Party situation introduced by Matt Wrack (FBU General Secretary and Steering Committee member) then there was an open discussion including discussions around migrant rights, freedom of movement and racism, LP structures and bureaucracy, witch hunts and expulsions, opportunities and risks for the future. People were honest about the real problems with face in the party and with Corbyn’s leadership. Some practical ideas for campaigning were put forward and we agreed to come back to these in the next steps item at the end of the meeting.

What was very welcome was that this was the first time we had been able to have a political discussion at the National Committee and this also gave an opportunity for us both to talk about what was happening in our region and our local groups which was very important.

The final afternoon session on next steps, outcomes and statements, while still open to observers only allowed contributions and proposals from National Committee members.

Despite there being different views of the way forward and different opinions of how we relate to the group who are continuing to impose a constitution, there was consensus achieved around key things. Some people clearing felt that walking away was an option, other seemed more keen on pushing forward with the annual conference as planned for February with the existing Conference Arrangements Committee.

But a consensus was achieved (again another real achievement for the National Committee) that we go ahead with a national Grassroots Networking Conference supported by as many local groups and regions as possible on Saturday 11 March.

We agreed that this would not be the “founding conference” as originally planned for February and this is not setting up a rival organisation.

There was some discussion on the upcoming National Coordinating Group elections with some people feeling that they should be boycotted, while others feeling that this was an opportunity to share our criticisms of what has happened and candidates is one way to do this. The meeting agreed to take no position on this.

The meeting did agree statements opposing the coup and reasserting the existence of the National Committee and we agreed a coordinating group of the existing Steering Committee members and the Conference Arrangements committee with additional representatives to be coopted from regions not represented.

The meeting also agreed to do some work around key campaigning ideas in addition to policies passed at the last National Committee meeting and will set up some working groups with volunteers via the email list. These will initially includes: Migrant Rights; Expulsions and suspensions; the NHS.

Wording of two proposals agreed (awaiting final wording on the proposal for meeting between NC and other representatives of Momentum etc).

We share the outrage which has swept the country about the coup in Momentum. We urge people not to resign or drift out in disgust. We need to continue the fight for democracy, a campaigning orientation and socialist policies, so we can build up an organisation capable of transforming Labour and the labour movement. We note the large number of local Momentum groups which have already met and condemned the coup, and the significant number which have called for a national networking event for groups in March.

More than one years afters its foundation, Momentum is nowhere near where it should be. Local groups have achieved amazing things but they have largely done this on their own. The top of the organisation has failed to develop the infrastructure, support and resources that should be available to members. Much worse, the behaviour of a portion of Momentum’s leadership has undermined the trust and goodwill without which we cannot function as a diverse, pluralist movement. The new constitution will entrench the power of one faction at the expense of the organisation as a whole.

The debate in Momentum ins now not about what kind of democracy we have – it is about whether Momentum has democratic structures at all. We do not take a view on the debate between online and in-person voting systems. But Momentum needs democracy and accountability in order to be competent, in the labour movement, only our collective wisdom can win – the collective wisdom of local activists who fight for their communities, for their fellow workers, for a different kind of society. We want to build a world in which every aspect of our lives is democratic. Momentum must live its values throughout the organisation.

We do not accept that the people who carried out the coup constitute the leadership of Momentum. We assert the role and responsibility of Momentum’s grassroots membership in formulating strategy, continuing our campaigns and holding organisations together.

1. We call on everyone in Momentum to stay in the organisation and work constructively with each other wherever we can, whatever our differing views on the content of the new constitution or the manner of its imposition.
2. We endorse the call made by a number of local groups for an national networking conference of representatives of local groups on 11 March. We call for as many local groups as possible to publicly endorse this call and to attend. This conference is not the “founding conference” that was planned for February, which was cancelled by the coup; and, while it may establish some connections or structures, it is not to set up a rival organisation to Momentum. Its purpose is to allow Momentum groups to – at long last – coordinate with each other on a national level: to learn from each other, discuss and develop campaigning ideas, and debate the way forward for Momentum, including the fight for democracy.
3. We call on local groups to continue meetings including at the original regional level to coordinate activities, to create the support networks and infrastructure our members need, to run training and education for our members and activists and to share examples of goof practice; and to catalyse the formation of new local groups.
4. We do not accept the coup and will not dissolve ourselves at a National Committee. We assert ourselves as a continuation of the structure established on 6 February 2016. We will elect a coordinating group at this National Committee.

This Momentum National Committee believes that Momentum must be an open and democratic group which enables debate and informed decision making. Members should decide policy, structure and activity. Members should be able to initiate proposals, and then vote on various choices, based on information and arguments.
The NC rejects the attempt to impose a new constitution for Momentum. This has taken place without members being allowed to even see the specific proposals, let alone discuss them and then vote on them.
The NC agrees to:
Encourage Momentum members and local groups to remain in Momentum;
Encourage local groups to continue to meet, and for members to form local groups where they are not meeting or cease to meet because the local officers are not convening them;
Encourage those groups to link up in area and regional committees of local Momentum groups. Those meetings should agree the policies and the campaigning activity for their areas and regions, and decide on policies to take into the Labour Party and the wider community. Groups should also decide on candidates to stand and who to support in local and regional Labour Party elections;
Encourage local groups to continue to accept participation from Momentum supporters who have been unjustly expelled, suspended or excluded from the Labour Party;
Support the conference planned by the Conference Arrangements Committee;
Suggest that the CAC holds that as a National Meeting of Momentum local groups, with voting by democratically elected representatives of local groups on the numerical basis by the last NC, and also open to observers without voting rights.