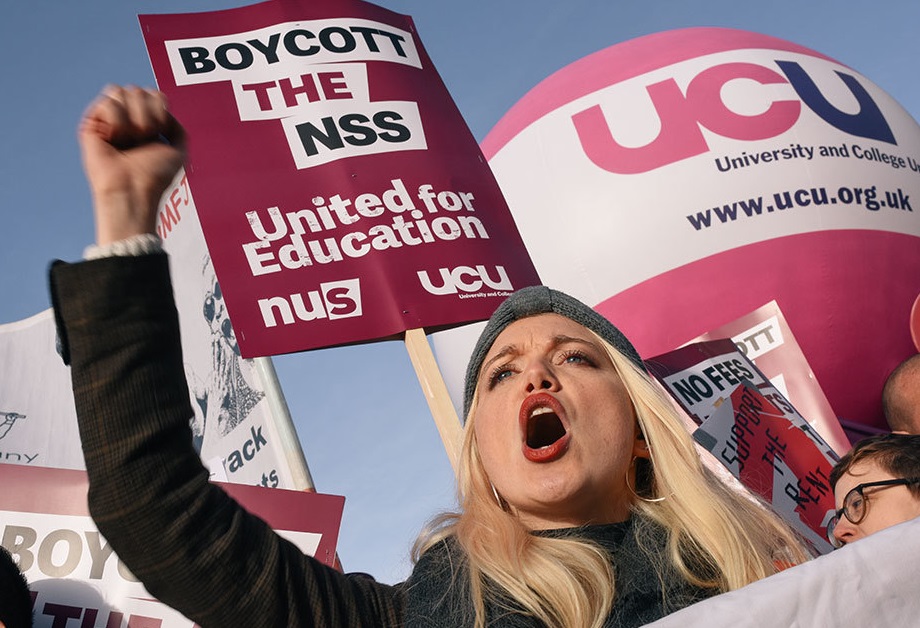 This weekend, Labour Students can choose to help the student movement win material leverage against fee hikes and privatisation – or it can undermine democratically-agreed union action.

This weekend’s Labour Students National Council meeting will vote on two visions of a strategy against the government’s higher education reforms. The reforms are centred on the misleadingly-named “Teaching Excellence Framework” (TEF) – an artificial market framework in which university workers and our institutions will have to compete on metrics irrelevant to teaching quality. The reforms have nothing to do with improving education in the interests of students, workers and communities, and everything to do with raising tuition fees, helping for-profit businesses take the place of public education institutions, and narrowing our freedom to academic and intellectual exploration, to let the interests of big business owners more closely dictate what we’re taught and how.

As one of UCL Labour’s two elected delegates to the meeting, I had intended to contribute to this debate in person. Unfortunately, this Tuesday, I became the latest subject of the bureaucratic purge of left-wing Labour Party members. You can judge for yourself whether it is a coincidence that this occurred immediately before a meeting likely to be finely-balanced between the right and left of the party, and in the middle of an argument between my Labour club and Labour Students officers about my eligibility to be a delegate. As a result, my club has been denied half its delegate entitlement and I’m writing my contribution from afar. Happily, my club has come out fighting, and members with diverse political views are united in demanding an open, pluralistic party where differences between socialists are debated democratically, not fought through bureaucratic shenanigans.

Anyway, to the point. The first of the two visions for a strategy against the HE reforms, proposed in a motion from Liverpool, SOAS and Surrey Labour Clubs, is one that fights on every front. As well as lobbying and demonstrative action, it supports collective direct action that aims to win material leverage by throwing a spanner in the works of the system, and refusing to remove it until we are heard – by boycotting the National Student Survey until the reforms are dropped. The NSS is a consumer satisfaction survey for final year undergraduates, run every Spring. It is already a crucial tool in the neoliberal management of higher education, used in league tables and by university bosses to pressure workers and justify restructuring and course cuts (and the resulting job losses). Under the new reforms, it will be one of the major metrics informing TEF rankings. Universities scoring well will raise fees, while those doing worse will be gradually starved of funds – a lose-lose prospect for students.

For too long, the student movement has come to negotiating tables empty-handed. By refusing to participate in the NSS, students gain some badly-needed leverage – we will not help the system to function until our demands are heard and conceded to. That’s why elected delegates at NUS National Conference voted for this strategy after it was proposed by the National Campaign Against Fees & Cuts, why activists on campuses (including Labour Clubs like mine) are hard at work to make it a reality, and why education workers in the UCU trade union and the Fighting Against Casualisation in Education campaign are backing it.

The other vision, proposed in a motion from Essex Labour Students and reflecting the line of current Labour Students leaders, rejects this strategy for material leverage in favour of lowering our sights. Though it makes lip service outright opposition to the reforms, it abandons any realistic ambition for defeating them in their entirety, and settles instead for lobbying in the Parliamentary debates for concessions to tinker around the edges.

The first argument raised against the NSS boycott is that, since the staged implementation of the TEF means NSS scores won’t be included for a couple of years, it won’t have an impact.

This entirely misses the point. First, the NSS is already a key neoliberal management tool, as I described above. A boycott starting in 2017 will materially disrupt the government and university managers’ ability to continue running higher education as they currently do. Second, a strong boycott before the reforms are even fully implemented indicates clearly to the government that we will continue in force until they back down, and make implementation unworkable.

The second argument is that the boycott will have a negative impact on students and student unions.

This view is born of the idea that the NSS is a benign force improving education. In reality, the NSS doesn’t give students a democratic voice in education, but treats us as passive, atomised consumers, reduced to simplistically expressing satisfaction or dissatisfaction at the end of a degree. Academic research has cast doubt on the value of the satisfaction survey approach, as well as indicating that it can be distorted by bias against women and black or ethnic minority academics. Fundamentally, the idea that teaching quality can be “measured” by a simplistic quantitative metric is blatantly absurd.

Moreover, the students who fill in the survey have little power over the interpretation and use of their input – all too often, it is used as a licence by managers to pile pressure on workers and intensify their exploitation, and to justify course and department restructurings which trade jobs, academic freedom and students’ interests for performance in the market.

It is also a result of the student union bureaucrat’s fantasy that they can rise to the level of an equal “partner” with university senior managers. They fail to understand the fundamentally opposed material and class interests on each side of this relationship, believing that clever networking and a bit of amateur rhetoric can secure students’ needs. This suits Vice Chancellors just fine, who invite union officers to posh dinners to make them feel important, and string them along with token concessions before starting over with the next year’s officers. As a result, too many in the student union movement are averse to getting confrontational, or doing anything that might displease university managers.

We have an alternative vision for the radical democratic empowerment of students, workers and communities in education. We are fighting not for passive survey-filling and vain attempts to be best friends with university bosses, but fully democratised education institutions, shorn of unelected, unaccountable managers and run by us. That’s the vision with which we should counter the Tory reforms.

Finally, Labour Students leaders have misrepresented their opponents in this debate. Based on a proposal some time ago that we should not legitimise attacks on students and workers by assisting implementation of the reforms – for instance, by sitting on panels determining TEF rankings – they have spun the line that those in favour of the NSS boycott are opposed to also lobbying for smaller changes within the HE bill. This false dichotomy is a distraction from the real work of building a fight on all fronts. 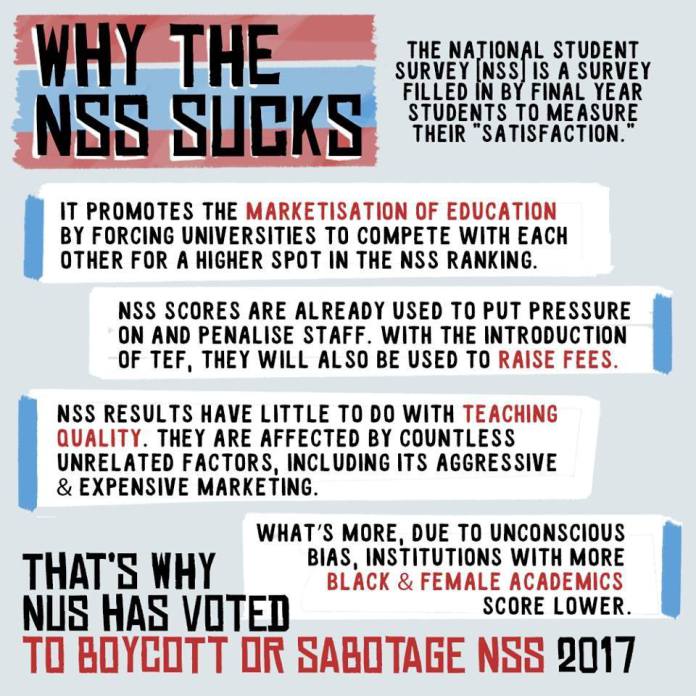 On top of the strategic debate, there is a fundamental issue of solidarity and union collective democracy at play here. Through our union’s democratic debate, students have decided to embark on collective, material action to defend ourselves and our education system from attack. Workers, also under threat and negatively impacted for years by the NSS, have likewise democratically voted to join us and support that action. But unable to accept losing the vote, a small number of union sabbatical officers recently organised a push – promoted by the Labour Students leadership – to delay and disrupt the implementation of the boycott with spurious calls for it to be bureaucratically risk assessed. Self-critical democratic discussion should always continue to ensure we’re on the right path, but the ongoing efforts to actively derail the action demonstrate a shameful lack of solidarity that runs counter to basic Labour values.

When students or workers are engaged in democratically-agreed collective action, withdrawing their participation in order to bring things to a halt until our needs are heard and met, any movement worth the name “Labour” cannot engage in disruption and undermining. Instead, it should be working on the front lines, building the most effective action possible in the spirit of collectivism and solidarity. This weekend, Labour Students must make that choice.