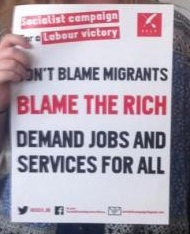 By Michael Chessum, Another Europe is Possible

There is a simple answer to the argument that immigration is to blame for low wages: 0.3%. That is, according to the Bank of England, the average figure by which wages deflate for each 10 percentage point rise in migrant labour in a given sector; in the lowest-skilled sector, it rises to 1.8%. The statistical measure is important: a ten percentage point rise is not 10% becoming 11%, but 10% becoming 20%. Since 2007, median wages have fallen by more than 10% in real terms. It clearly isn’t because of immigration.

This matters because over the next few months, the left is going to have its commitment to freedom of movement tested. But as the government goes into long, complex Brexit negotiations and parliament votes on the triggering of Article 50, Labour is in a position to shift the debate and win concessions. Sadly, in Labour, unlikely voices can be heard making arguments that were once confined to the right of the party: that free movement has not worked, that it is eroding identity or wages or public services; and that free movement is not a priority.

Of course, most people on the left who argue that wages are falling because of migration are not saying what they actually think. They think they are channeling what “working class people” want, as if working class people are not also migrants and had not, collectively, been responsible for the most inspiring and effective anti-racist movements in world history. This is not “listening”, it is patronising people: since when has the left’s starting point been to say what is popular?

The squeamishness about free movement in some parts of the left stems from a false economy. Supporting immigration controls could be electorally useful – a sort of unprincipled tunnel vision. But it isn’t how to win an election: if people want immigration controls, they’ll vote for the real thing. The job of the left is to convince people of the reality – that public services, housing and wages are not in crisis because of migration, but because of the decimation of industry, the fire sale of social housing, the hyper-exploitation of the 21st century workplace, the defeat of the labour movement, and so on.

There is no particular democratic mandate to end free movement with Europe: 48% of people voted directly to continue it, and of the 52% who did not, not all will have wanted it to end. In the coming Brexit negotiations, Labour and the wider left must make retaining free movement – along with workers’ rights, environmental protections and human rights – one of its key demands.

Too often we are caught on the defensive about immigration. But above all, the freedom to move is a class issue. Rich people can move, work, study and buy up property wherever they like. Ordinary people can’t. Borders are like capitalism: the poor get exploited and confined to whatever piece of land they were born in, while the rich get state bailouts and a borderless world.

The freedom to live where you want – like the freedom to dress how you want or love who you want – is a freedom that is worth fighting for. For a brief moment the European Union provided its citizens with that freedom. Not always for the right reasons, not without problems. It is our job is to defend and extend such freedoms.