Note: Since this article was written, the left in MLS has won a clear majority on its new committee. 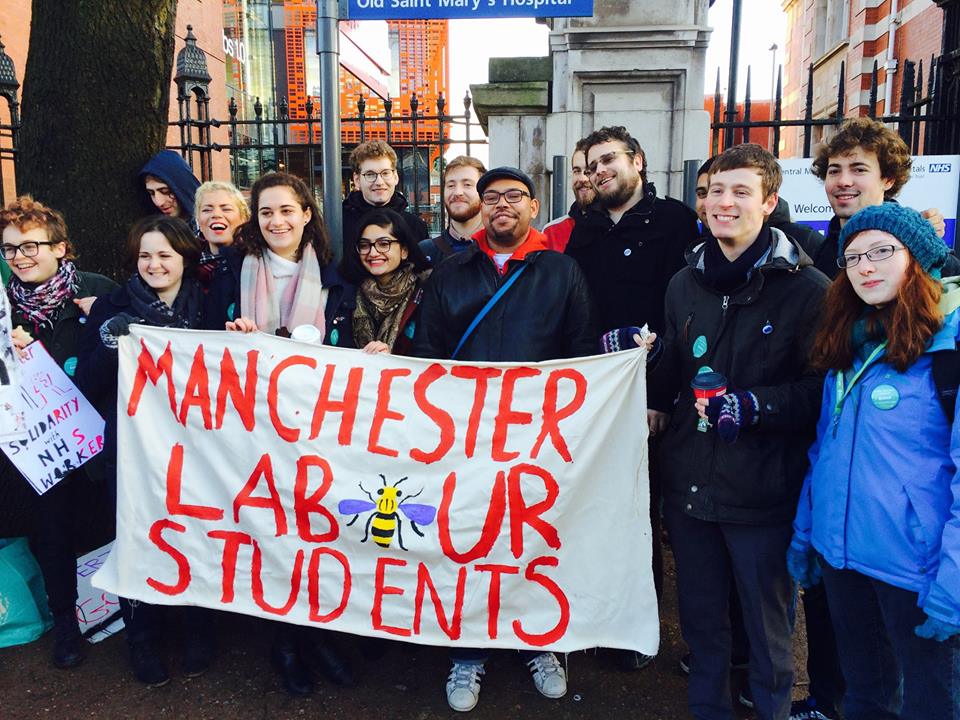 Over the last year, socialists have made a successful intervention into Manchester Labour Students (MLS), a notoriously Blairite grouping. Its transformation is far from complete, but our efforts deserve recounting for its lessons on left wing organising and the conduct of the “moderate” wing of the party.

In recent years, MLS acted as the organised right wing of Manchester Students’ Union. It was a hotbed of party careerists with Blairite politics, and little internal democracy. In general MLS was run by – and to a concerning extent remains dominated by – moderate, mainly middle-class students. It represents both Manchester Met and the University of Manchester; but its far greater organisation in the latter institution partly reflects its class composition.

Across the same period the SU has generally been run by the soft left, though the local student movement has a history of struggle, with four student occupations since 2010. Many of the socialist left who went on to organise the Labour left had a background in the eight day occupation of Manchester Business School in 2015. Others of us were engaged in struggles over NHS privatisation, and the conditions for health workers and students. The mobilisation around Corbyn’s election, however, compelled a left which was fractured across different campaigns to collectively turn towards the opportunities in Labour Students.

From September 2015, MLS had a massive influx of new members, but refused to have members’ meetings. They claimed this was because of the need to focus on campaigning in the Oldham West and Royton by-election. In reality, Labour Students’ national office had instructed allies in right wing Labour Clubs to put meetings on hold in an attempt to contain the left wing surge. This indicated how they viewed the new membership as a problem to be suppressed rather than a positive opportunity to transform the party. The MLS establishment were uninterested in building a big or active group as that would force them to work with socialists and threaten their backwards ways of operating. They insisted on a narrow electoralism which they believed was counterposed to basic democratic functioning, discussing political ideas and organising alongside workers. We understand all of these as essential for the fight for socialism.

The left took on the organising work that MLS ought to have been doing. A new member took initiative and called a meeting under the title Labour Left Students for Corbyn, to which 80 people turned out. There was a popular feeling that we should try and make MLS reflective of the socialist ideas of its new membership and leadership. The second of these meetings was attended by a number of the MLS right wingers who tried to disrupt it through disingenuous claims that they had been bullied – foreshadowing the behaviour of the PLP in the summer.

Elections took place in December after pressure from the insurgent left wing membership. Out of the ‘Labour Left Students for Corbyn’ meetings we organised a slate, but won only 3 of the 13 positions. We continued to meet and discuss the political struggle inside, and outside, of Labour. We collaborated with those we met in Labour to found a student-worker bulletin called The Bee-Hive, support the junior doctors’ struggle, and play a pivotal role in defeating the University of Manchester management in an industrial dispute over 43 catering job cuts. Together Unison and a student-worker campaign – Keep the Caterers – fought against the redundancies through a strike ballot, demonstrations, a student occupation of the Vice Chancellor’s office and disruption of management meetings. The MLS Committee was in practice obstructive on this issue, but we organised persistently. We used our positions on the committee to organise caucuses and recruit heavily, notably amongst BAME people.

The tactics employed by the right in the first term continued throughout the year, with extensive attempts to refuse to let members have a say in the group’s direction following demands for regular, democratic meetings. This had a demobilising effect on a number of new members who have since told us that they were appalled by the cynical behaviour of those on the committee. Despite the difficulties, we used our left caucus as a battering ram to open up an insular Labour club. Progress was made in overcoming attempts to prevent democratic elections, and in allowing all members to meet monthly to discuss and vote on their own agenda. In this context, proposals for action from the radical left have become the standard policy agreed by members.

This transformation has not been without setbacks: the Co-Chair elections were narrowly won by moderate candidates. Moreover the level of political education needs raising (amongst the left membership too) to incorporate more discussion about the idea of socialism, working class political representation, and rank and file organisation and class struggle. MLS has changed from a club which was essentially run by two people and only organised campaigns around election door knocking, to one with a high level of engagement and a democratic political culture. This gives the members an opportunity to further develop the club and create a culture of activism orientated to the workers’ movement. Watch this space!