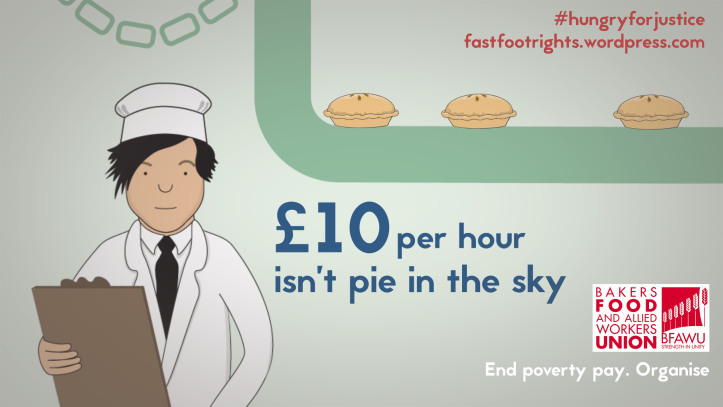 Armed with petitions to raise the minimum wage to £10 per hour, and guarantee union membership, we go into a busy fast food restaurant just after lunch on a windy afternoon in Glasgow. Our goal isn’t to talk to customers, but the staff. The reaction of the workers out front was to take the petition from our hands and take it to every worker in the building.

They gathered to ask us how many signatures we had collected, how many we aimed to collect, and then jokingly pointed out that they’d be happy to sign it with five different names if that helped meet the target. They kept a blank form and offered to keep it in the back and let workers who weren’t on shift know about it when they came in. They even told us the location of a sister restaurant whose staff were similarly hard-pressed and mentioned that we should go there

The plight of fast food workers is obvious. Staff rotation is high, pay is low, and the owners of major chains have things so wrapped up that you’d struggle to get the time to read the handbook that would tell you how many provisions your boss can’t be bothered to give you. The general conditions of this employment prevent organization, mass solidarity, and foster competition amongst staff and the supervisors who are barely a hare’s breath above them in terms of income.

These are the exact conditions we often vaguely nod towards when we lament the fragmentation of the working classes in modernity. We make this argument by standing the modern workplace in comparison to a nostalgic view of industrial organisation where everyone was exploited en masse, and the exploiters were obvious, they left the factory through the same gates, though wore different hats.

The problem is with this analysis is that it sends us over the edge into a chasm, it is an irreconcilable barrier, preventing us from doing much more than persevering in an impossible situation, or hoping that the British bourgeoisie reproduce late 1800s working conditions as they reproduce its social division.

But comrade I am here today to attempt the building of a bridge over that chasm, for whilst the means of organising the workplace in a service-based economy differ from a manufacturing-based economy, the workers feel their exploitation just as keenly, and those differences in organisation are not irreconcilable. What we have seen in the Fight for 15 Campaign in America is a means of building unions that transcend work places and network communities of workers. And we are applying these lessons. The sister campaign in NZ has taken 0 hour contracts from McDonalds, and now in the UK we have a £10 minimum wage as policy of the Labour Party. Far from working in isolation, these victories are products of global lessons, with global connection and networking of workers.

The value of the demand for £10 an hour – and why you must get behind it (other than the inherent logic in forcing employers to pay their workers enough to live) is that this has the opportunity to reach millions of people who don’t usually vote. Who lack a connection between their hard work and low pay that is political in nature and points to political action as a means of change. As a party, we should be servants to the people. And this is what people need. Workers may be getting fed spin at every level, but even Rupert Murdoch himself cannot spin away the humane decency of, and need for, a living wage. Indeed, when he and ideologically biased managers argue against it, they expose workers to the contradictions of their position, and how they are really seen by their employers. Not as valued colleagues, or even as logical economic actors, but as wage slaves to be turned over at a rapid rate.

We need new methods for organising in this brave new world, still reeling from the destruction and overthrow of socialism in every country, at every level through the ‘80s. We are in a period of rebuilding. And this is a road map towards the reconstruction of an animated social consciousness.

If you are thinking about endorsing this campaign, rest assured that as a Momentum member, you already do. This is because its key organiser is John McDonnell. Labour activists should invite the campaign into speak at their branches. They should form £10 an hour campaign groups, and they should go and speak to workers they know about why they should collectivise their workplace.

Yes this can get the vote out, introduce new people to something they want to vote for, but also can vote for. But beyond this, organised labour is a motive force, that historically has given us every benefit we enjoy today, it was organised labour that forced capitalism to take a social democratic route following the war, building the NHS and pushing FDR’s market reforms that ended the great depression of the 30s. It was organised labour that created the socialist east that acted as a bulwark in limiting capitalist exploitation across the world. In the west, we forced the rich to throw some scraps from the table, but we want a society whose purpose is in using our incredible productivity to raise the standard of living generally, not just to accumulate private wealth, and only collective action can achieve this. The precursor to collective action is collective consciousness, and it is the rebuilding of this consciousness which history has tasked us with, we must see outside of our individual selves to the larger truth of society, that our individual freedom is mutually assured and structural in nature – and something as simple as a campaign for £10 per hour acts as a vehicle for this.

When the workers signed our petition, they also saw hundreds of other signatories from workers just like them – in competing businesses – this exposure to a mass exploitation, and the agreement to a mass demand, is achievable, and inevitable – and the force which changes history.