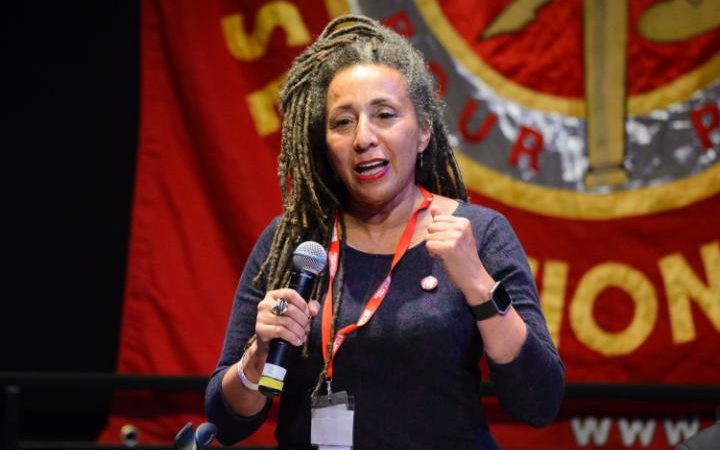 Early in October, the Momentum Steering Committee, at a hastily called meeting, decided to remove Jackie Walker as its vice-chair. Since then, several Momentum groups around the country, including my own, have criticised this decision.

These moves arose from comments Jackie Walker made at a Labour Party official training session at party conference in Liverpool. No serious criticism of the Party for holding a training session on anti-Semitism separate to other racisms – in contravention of what the Chakrabati report recommended, no criticism of the Party for handing the training session to the Jewish Labour Movement (JLM) to run, despite the fact that its views are known to be extremely contentious among socialist Jews. No calls on the Party to take action against the JLM for not only recording the session without authority and consent (in contravention of Data Protection rules) or for releasing the recording to the media. In fact, the Party has rewarded the JLM with a place on the NEC’s equality committee!

No, instead of picking up these points, leading Momentum members led the charge in denouncing Jackie Walker for what she said (in fact, distorted versions of what she said). Manuel Cortes, General Secretary of the TSSA, one of two unions affiliated to Momentum, threatened to withdraw support and facilities from Momentum if Jackie wasn’t removed as vice-chair. Currently Momentum operates from a floor in the TSSA offices. Imagine the outcry from the left if a trade union leader tried to dictate Labour Party policy in such a way. Yet no statement was forthcoming from Momentum attacking such blackmail.

Other leading members of Momentum also went to the media – anonymously, disgracefully – to denounce Jackie Walker and announce – in advance of any decision – that she would be removed from her position.

Leading figures in Momentum were quite clearly dancing to the tune of the JLM, which had gone on the offensive after the Liverpool training session, calling for Jackie to be expelled from the Labour Party. The JLM was never satisfied with the Chakrabarti report, which did not give them the carte blanche they wanted to denounce critics of Israel as anti-Semites, or with Jackie Walker’s reinstatement by the Party after a previous suspension for allegations of anti-Semitism.

Despite the JLM recording the training session, much of what Jackie said has been misquoted or taken out of context, including by many on the Left who ought to know better. As someone who was there I have quite a good idea of what was said (and what wasn’t). To give only one example, Jackie said at one point “I haven’t heard a definition of anti-Semitism here that I can work with”. Leaving aside the fact that Jackie wasn’t the first person at the meeting to raise this point, it is said in the context of the JLM “trainer” attempting to push the discredited definition which includes criticism of Israel. Moreover, the JLM are attempting to back that up with a rule change which says that if someone is accused of anti-Semitism they are guilty. In this they wilfully distort one of the conclusions of the McPherson report (after the murder of Stephen Lawrence) that such accusations are to be properly investigated, not that they are proven.

This in the context of the weaponisation of the charge of anti-Semitism by opponents of Crobyn, the victims often being Black women – besides Jackie Walker, Malia Bouattia and Shami Chakrabarti herself.

Encouraged by the furore by leading Momentum supporters, the Party moved in and suspended Jackie from Party membership.

Subsequent to their decision to remove Jackie Walker as vice-chair, the Momentum steering committee put out a statement saying that their decision was because they had lost confidence in her as vice-chair and did not regard any of the comments she appears to have made, taken individually, to be anti-Semitic, … but ill-informed and offensive.” It also said it thought Jackie should not be expelled from the Labour Party.

This is hard to stomach – the furore around Jackie’s comments was clearly created by those claiming they were anti-Semitic, and Momentum took action following that, rather than standing up to it. The disclaimer rings hollow.

But even if we take at face value the claim that Jackie was removed because they had lost confidence in her, this does not stand up to serious scrutiny. Jackie was at the training session not as a representative of Momentum, but as an individual party member. Yet many a “Momentum spokesperson” has appeared on TV espousing policies not agreed by anyone. What action has been taken against them? None.

And basic solidarity would require that when someone is under attack you defend them, not add fuel to the flames. Momentum failed to do this. You do not have to agree with Jackie’s views on Zionism or Israel to recognise this need. If it is so opposed, as claimed, to Jackie’s expulsion by the Party, where is the campaign in her defence (or, for that matter, in defence of all the others `purged’ by the Party)?

In this whole sorry saga, the Momentum leadership has shown itself unwilling to act as it should, rather capitulating to pressure.