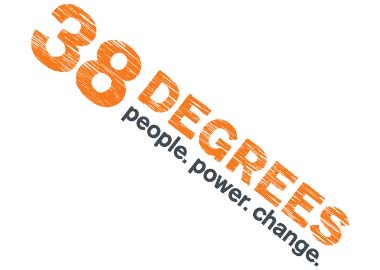 38 Degrees, founded in 2009, promotes itself as an exemplar of democracy and “people power”, and seems to be seen that way by some people in Momentum. For sure the model some advocate is reminiscent to 38 Degrees.

38 Degrees started with funds from trusts and foundations, which enabled it to set up a large and well-resourced office, by the standards of left-ish campaigns: it spends over a million pounds a year on paying its 35 full-time office staff.

It has a Board of worthies, which, it says, “meets a few times a year” “to make sure that the organisation is… accountable to its members”. But neither the Board nor the office staff are elected.

38 Degrees has a sufficient web presence now that it can get £3 million a year in donations, mostly online.

It claims three million members, and says its members decide its campaigns. To become a member means online signing one of its online petitions. From time to time the office staff poll “members” online about campaign priorities (but they don’t publish the poll results, and what they do publish suggests very few “members” vote in these polls). The details of campaigning are decided entirely by the office staff.

At the height of the agitation against the Tories’ Health and Social Care Act, an NHS campaigner went to the 38 Degrees office to ask if they would cooperate. (38 Degrees had been active on the NHS, and its network had provided many useful contacts for some local NHS campaign groups). The 38 Degrees staff were shocked at the fact of an actual person, rather than an email, coming to their office! Talk? Discuss? No way.

38 Degrees mostly just promotes online petitions. It sometimes provides a useful channel of communication for real-life protests on the streets. But it doesn’t organise any. It certainly doesn’t organise, and with its structure could not organise, in workplaces, or within organisations such as trade unions and the Labour Party. It is clicktivism plus a well-funded office staff.

If Momentum is to be effective, it has to be active daily and weekly on the streets, in the Labour Parties, in the unions, in the workplaces. And that requires a continuous, structured, decision-making process by which the activists form an evolving collective majority view on what to do each day, each week, each month – not from-time-to-time online plebiscites of the members with the results interpreted by the office staff.

The 38 Degrees structure is not suited to an activist organisation.