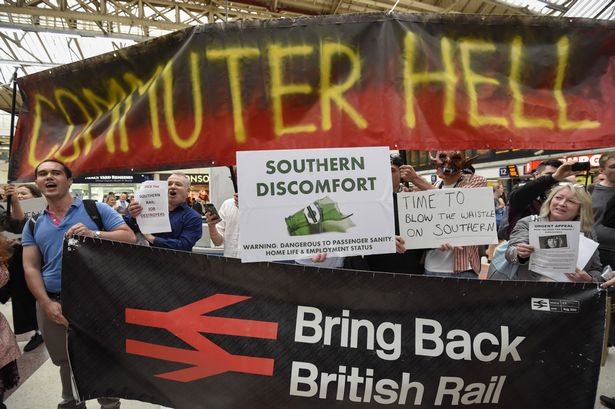 By a railway worker

Strikes in the railway industry over the past year stand out against figures showing industrial action at its lowest levels since records began.

Workers on Southern, ScotRail, MerseyRail, Virgin East Coast, and Eurostar have all been involved in disputes, with Southern and ScotRail in particular seeing prolonged, and, in Southern’s case, ongoing, campaigns of strikes. Southern guards are next due to strike on 4-5 November, 22-23 November, and 6-8 December.

Many of the disputes are reactions to rail bosses’ attempts to impose “Driver Only Operation” (DOO). Currently, many train services have at least one other member of safety-critical staff on board in addition to the driver. Despite media focus on the issue of opening and closing doors, the role of the guard is much more expansive. Fundamentally, they are a highly-trained, safety-qualified failsafe, able to assist the driver in any incident. Reducing guards to “On Board Supervisors” (Southern’s term for the new role they want to impose) represents a significant safety risk, and is a prelude to getting rid of the second member of staff altogether. On ScotRail, strikes by RMT members won an agreement to retain a second, safety-critical member of staff on all services that currently had them.

The push to DOO is part of a wider project of de-skilling and de-staffing pursued by many Train Operating Companies. The onus comes from the McNulty Report, a government review commissioned by the 2005 Labour government and delivered by the Tories, which reccomends job cuts as the best way for the railway industry to cut its overheads. It is the inevitable consequence of the subordination of a public service to the exigencies of profit.

Southern’s woeful mismangement of its franchise has provoked huge passenger anger, which the RMT union has been able to link up with not only to mobilise support for its members’ strikes, but to begin building a political campaign for public ownership.

Such a campaign could have huge public resonance. Polls show upwards of 60% support for renationalisation of the railways; a properly organised public campaign, involving rallies, demonstrations, and other direct action, could mobilise millions.

Rail unions and the TUC currently run the “Action for Rail” campaign – a worthy effort, but in practise amounting to little more than occasional photo-calls featuring union officers outside train stations. The Corbyn-McDonnell leadership of the Labour Party, and renewed industrial action amongst rail workers, creates the potential for much more.

Two of the three major rail unions, Aslef and TSSA, are affiliated to Labour. Both unions backed Corbyn, and could be instrumental in pushing for and shaping such a campaign. The third, RMT, was effectively expelled in 2004, after its national leadership refused to censure Scottish branches that wanted to back the Scottish Socialist Party, then a growing force in left politics. Despite that expulsion, and despite pursuing a strategy of electoral challenges to Labour through involvement in the Socialist Party-led “Trade Union and Socialist Coalition”, RMT has retained significant links to Labour at the Parliamentary level, and was the highest single union donor to Corbyn’s 2015 leadership election campaign. Its Parliamentary Group was formerly chaired by John McDonnell, and both he and Jeremy Corbyn remain members. The prospect of a reinvigorated, left-led Labour Party, clearly undergoing a process of transformation, leading a vibrant public campaign for rail renationalisation, would certainly add weight to the argument that now is the time for the RMT to follow the Fire Brigades Union back into Labour affiliation.

A joint campaign between Labour and the rail unions for a publicly-owned railway fits what one might call the objective needs of the moment in a number of ways. It is a way for Labour to get on the front foot, to go on the offensive for its own policies (and, in this case, one which is hugely popular) and begin shaping political consensus rather than responding to a narrative set by the Tories and their supporters in the press. By tying the issue of public ownership to rail workers’ strikes against job cuts, it links to the political to the industrial – broadening strikers’ perspectives beyond their immediate industrial disputes and into social, governmental questions, while simultaneously educating hundreds of thousands of new Labour Party members about the centrality of workers’ organisation and struggle as a motor for change. And it reaffirms the Labour Party in its foundational role as the voice in politics of the industrial labour movement, speaking and acting in an unashamedly partisan way for working-class policies and interests.

Southern workers will mount picket lines at stations and depots across the network during the strikes. Contact the RMT union on info@rmt.org.uk for locations. Organise your local Labour Party and/or Momentum group to visit a picket line to support the strike!