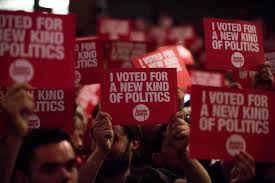 When the Momentum Steering Committee – which was months beyond its remit – met at the end of October they made several decisions which exposed a very real difference that exists in Momentum over its future.

To be clear – Momentum must stay united and there is certainly enough good will in the organisation to have out quite serious, existential debates, in the spirit of going forwards. But we also have to be clear about the nature of the debate that is looming before us.

The question of whether the National Conference is conducted through online voting or delegates, and the role of a national committee in decision making, aren’t technical or practical issues. They point to a different philosophy at work. In short what is Momentum for?

The current model favoured by some in the office and on the leadership seems to tend towards a highly centralised organisation where the Steering Committee and paid workers and volunteers do most of the organising and running of the organisation. They concentrate on managing the database, sending out emails and mobilising Momentum members as a stage army for big events, phone banking, online voting for the NEC, attending occasional events like The World Transformed. For them, the existence of local groups and all the paraphernalia of ‘structures’ is a hindrance to getting active. They certainly don’t want Momentum to adopt policies.

On the other hand there are people who value the structures, the regional committees, the delegates and the national committee. For them the committees play a crucial role in linking the activists who make up the foot soldiers of Momentum and ensuring their voices and views are heard.

Within that difference the online One Member One Vote proposal, whilst appearing more democratic (“everyone can vote!”) is potentially being used to bypass the activists who make up the organisation – just as the SC bypassed the local groups and the NC to make their apparently emergency decision on 28 October.

The value in the delegate system is that they are representative of the actual base of Momentum, the people who are doing the work on the ground. The danger in the online voting system is that it gives power to a wider passive membership who will be instructed the activists in what to do, but not necessarily doing it themselves.

For some of us this is all worryingly familiar. A bureaucratic clique going over the heads of the activists to appeal to the wider membership – that’s exactly what Tony Blair did in 1995 with scrapping Clause IV. He knew he couldn’t get it through the conference so he appealed to the wider, more right wing and passive membership. The language Blair used to justify this is reminiscent of the kind that some of our present leaders are using. Plebiscitary voting – whilst not wrong in principle – favours the already existing leaders and media personalities, since they are the ones that the ‘stay at home members’ will recognise and respond to.

What was revealed was the bureaucratic impulse of a wing of the organisation. Upon discovering that 33% of our membership are not in organised groups and therefore couldn’t participate in decision making, the response wasn’t we have to get those people organised – it was “we have to scrap the already agreed procedure and make a unilateral decision.” That they didn’t expect the scale of the backlash reveals for them only that they were right to bypass the committees, for the SC majority the committees are dangerously composed of ‘head bangers’ and sectarians who need to be disempowered.

Let’s be under no illusion, Momentum is at a cross roads. Can it become a member led organisation with properly democratic channels and structures which combines both politics and activism in a positive and useful way? Or will it become a clitcktivist stage army where the local groups are deprived of any capacity to influence or guide the future of the organisation?